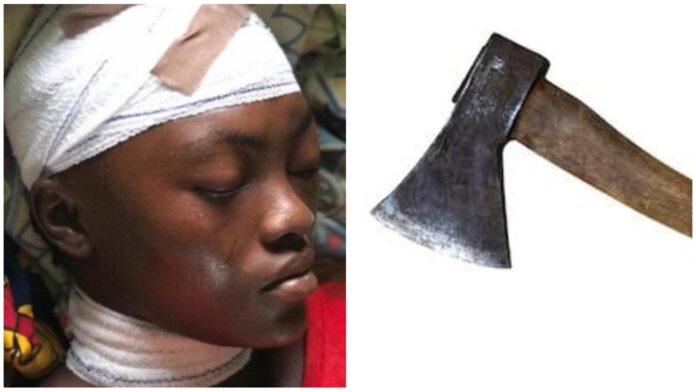 A woman identified as Augustina Jowho Broma was struck with an axe by her 39-year-old husband, Anthony Edijala, after he accused her of using mysterious powers to shrink his penis.

He said his male member used to be bigger than its current size but began to shrink after they went their separate ways.

Anthony went to his baby mama’s shop On the day of the incident, in an attempt to see his kids but they had an argument.

During the argument, the suspect grabbed an axe and struck Augustina on the head and spine, almost killing her.

Following the attack, an angry mob beat the suspect to a pulp and would have caused further damage but for the timely intervention of some policemen who rushed to the scene

Anthony has since been arrested by the police.

A brother to the victim, Felix Broma disclosed that his sister was rushed to the General Hospital, Ughelli, where she underwent surgery.

She is still in the hospital and there are fears she may suffer partial paralysis.

It was a heartbreaking moment as the three children found dead in a car parked at the compound of a former police officer were...
Read more
Society News

Leader of a faction of Boko Haram, Abubakar Shekau has come out to claim responsibilty for the deaths of 43 rice Farmers massacred...
Read more