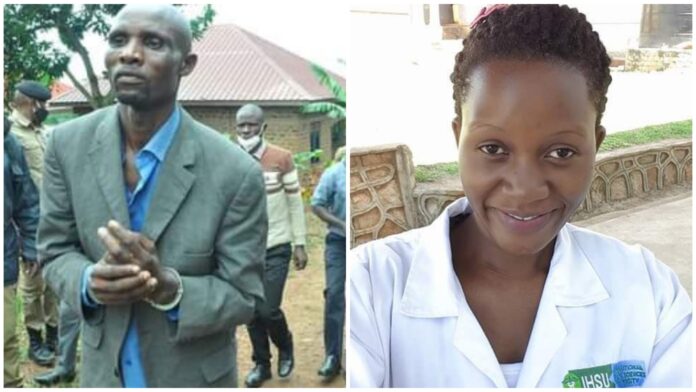 Man sentenced to 17 years in prison for killing his wife over alleged extra-marital affair.

The Ugandan man identified as Simon Shimanya, who confessed he killed his 32-year-old wife and former nurse at International Hospital Kampala, was sentenced on Wednesday, September 2.

The Chief Magistrate of Nabweru Court in Wakiso District, Ms Patricia Amoko, jailed Mr Shimanya, reasoning that the manner in which he killed the deceased using an axe was traumatic and gruesome.

Mr Shimanya was arrested on August 12 from Isingiro District and charged with manslaughter in connection with the August 1 violent murder of nurse Violet Kakai at their home in Bbumbu –Kiteezi, Wakiso District.

The 40-year-old teacher admitted using an axe to hack his 32-year-old wife and mother of three to death.

During the sentencing of Mr Shimanya, the Chief Magistrate held that the accused caused a severe head injury that led to death of his wife.

The degree of injury and the weapon used in killing the deceased in front of her children was threatening. No child or person should witness the killing of their mother by their father.

She reasoned that the court had considered the fact that the children had already lost one parent and therefore needed someone to comfort them.

Mr Shimanya appeared before court via video conference in a session held at Buganda Road Court. While confessing to the crime, Mr Shimanya explained that it was not his intention to kill his wife but it was anger resulting from provocation as the couple had escalating marital issues. He had asked for a lenient punishment to enable him go back home to take care of his children.

The Prosecutor, Mr Timothy Amerit, had asked court for a deterrent punishment of 25 years, reasoning that such acts are rampant in this era of domestic violence,
“In order to safeguard the children from trauma of seeing a man who killed their mother, it is justifiable that a custodial sentence be meted out to him,” he said.

Mr Shimanya narrated that the death of his wife followed a protracted fight and struggle which he said had resulted from the deceased’s extra-marital affair with Mr Robert Sebuufu, a driver with Katakemwa Chensire Home at Mpererwe.

He said that Mr Sebuufu had for a long time taken over his wife and that the matter had been reported to different authorities, including courts of law, to reconcile with his wife but in vain.

The deceased alleged lover, Mr Sebuufu, who is also a suspect in the same case, is currently detained at Kasangati Police Station pending investigations.