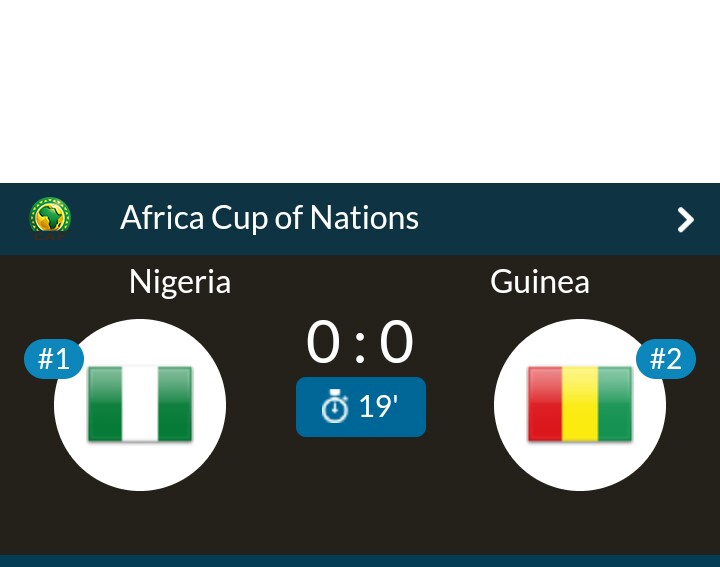 Hoping that Super Eagles of Nigeria will become the first team to qualify for the knockout stage at the 32nd Africa Cup of Nations staged in Egypt should they secure all three points against Syli Nationale of Guinea.

1’ — Guinea Kick off Guinea gets the game underway.

2’ — Akpeyi makes save Half Chance! Akpeyi is forced to an early save

6’ — Ighalo fluffs his line Ahmed Musa embarks on a dashing run in the left flank and finds Ighalo in the box but his first touch is poor and the goalkeeper gathers.

15’ — Both teams beginning to settle into the game after a nervy start After 15 minutes played, the score line still remains 0-0

32’ — BIG CHANCE! Ighalo misses after a pass from Moses Simon
What a chance! Nigeria get the first big chance of the game as Moses Simon plays Odion Ighalo through on goal. The striker fires into the side net when he could have passed to Ahmed Musa who was free.

37’ — Chance! Iwobi forces a save from Ibrahim Kone Alex Iwobi with a fierce shot from the edge of the box but Guinea goalkeeper Ibrahim Kone is equal to the task as he parries it away to safety

45’ — Half time: Nigeria 0-0 Guinea
The referee signals the end of the first half. Both teams have created chances with Ighalo coming close for Nigeria and Sory Kaba going close for Guina. Still all to play for in the second half.

47’ — Penalty appeal for Nigeria! Moses Simon appeals for a penalty after he claims his cross hit Sylla’s hand but the referee waves play on.

50’ — Nigeria with sleek passes Nigeria showcase high level of sleek passes in the edge of Guinea box but Ighalo’s attempt to find Musa is intercepted by the Guineans. That’s better from the Super Eagles.

55’ — Moses Simon miscalculates
Moses Simon tries to get a corner kick from a tight angle but he is crowded and kicks the ball out for a corner.

57’ — Great spell from Nigeria as Omeruo shows good skills .
Nigeria who have seven corner kicks in this game have a good spell with the but Omeruo’s cross in the box doesn’t trouble the goalkeeper. He however showed great skills to beat his marker. Top class from the defender.

62’ — Iwobi’s shot is saved Alex Iwobi tries a curling shot from distance but Ibrahim Kone is equal to the task and parries away. Nigeria have come alive in Alexandria, Egypt.

65’ — Yellow card to Seka Seka is booked for a foul on Odion Ighalo at the edge of the box. Free-kick to Nigeria and a golden opportunity.

67’ — Ibrahim Kone saves Etebo’s free-kick Etebo takes the free-kick for Nigeria but it doesn’t trouble the goalkeeper who parried away.

81’ — Substitution for Guinea, Kamano Out, Bengali-Fode Koita Kamano who was very lively in the first half but was quiet in the second half comes out for Bengali-Fode Koita. Guinea have now taken out their two biggest stars in Kamano and Keita. Can they find a way back in this game?

85’ — Guinea pilling pressure with five minutes left to play Guinea pressing forward and trying to get an equalizer.

88’ — Substitution for Nigeria! Onuachu In, Ighalo Out With two minutes left in the clock, Ighalo is replaced with Onuachu. Man of the match award will be going to Kenneth Omeruo.

90’ — Free-kick to Guinea in dangerous position but comes to nothing Guinea gets a free-kick in a good position but Bangoura’s cross is poor and the Nigeria can now forge forward with the ball. Three minutes of added time to be played.

The referee blows the final whistle and Nigeria secure all three points to become the first nation to qualify for the knockout stage at AFCON 2019.