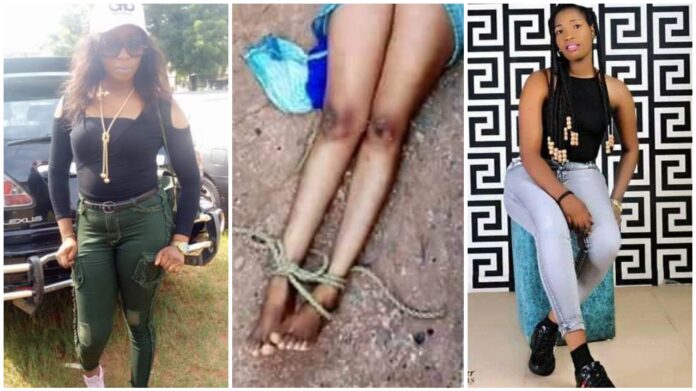 The body of Sophia was found at AOdikpi village, along Osumenyi/Akwuihedi road, Osumenyi with her hands and legs tied with rope and her mouth gagged. There are also marks of violence on her neck.

Comfirming the ugly incident, spokesperson of the State Police Command, Haruna Mohammed, said efforts are being made to apprehend the perpetrators.

Body Of A Lifeless Student Found In Niger State (Photo)

PHOTOS: 20-Year-Old Girl Raped And Machete To Death In Illorin

VIDEO: Woman Gives Birth In Her Grave After Being Buried For 4 Months

He said in a statement:

On the 10/11/2020 at about 12pm, there was a report by a good Samaritan from Osumenyi in Nnewi South LGA that a girl whose name and address is yet to be ascertained, aged about 22years was seen lying lifeless inside a gutter along Osumenyi/Akwuihedi road Osumenyi with mark of violence on her neck, mouth was sealed with tape while her legs and hands were tied with rope.

Scene was visited by Police operatives attached to Nnewi Area Command and victim was rushed to Visitation Hospital Osumenyi where she was confirmed dead by the doctor on duty. Corpse was photorgraphed and deposited at the same hospital morgue for autopsy and effort being intensified to ascertain circumstances surrounding the incident in order to apprehend perpetrators and bring them to book

According to David Azubike Chikwunyelum who knew the victim, late Chinasa was a sales girl and he used to patronise her.

Some time on Sunday evening or Monday this week i came across this post (Only the victim as her lifeless body lays on the drainage), I by passed it, reason I can’t Identify the face, secondly I don’t have come to believe that some whom i know will be a such victim, it never occurred in my mind. Today as I arrive for normal business my neighbors greeted that a lady was killed in Nnewi by unknown people and dump in the gutter and was in Facebook , I remembered I came across such! I ask for her identity , oh my God it’s Chinasa, she is a sales girl, I use to buy from her Bullet energy drink, Pure Heaven fruit juice and Vitasoy soya drink. May her soul rest in peace