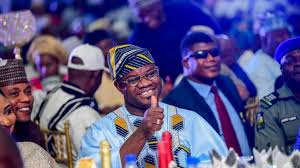 Governor Yahaya Bello on Thursday, August 29, emerged the standard bearer of the All Progressives Congress (APC) in Kogi for the November 16, governorship election in the state.


FreshReporters News gathered that a total of 3,596 delegates out of 3,838, were accredited for the primary.
It was learnt that ten aspirants were cleared by the APC national working committee to contest in the election.

As the results were being awaited, Justice Abdul Awulu, the vacation judge sitting in a high court in Lokoja dismissed an ex parte application to stop the governorship primaries of the APC in the state.

Presidency reveals why Governor Bello was absent at APC governors’ meeting with Buhari
Ruling in the application filed by Mustapha Audu, a governorship aspirant, Justice Awulu, held that the court cannot stop the primaries by order.

Meanwhile, it had been previously reported that one of the aspirants of the APC for the governorship election in state, Mustapha Audu, threatened to drag the party to court after being disqualified by the screening panel headed by Hope Uzodinma.

It was reported that Mustapha who is one of the sons of the former governor of the state, Abubakar Audu, said he was disqualified based on how his name was spelt on his secondary school certificate.
(Legit)

12-year-old Murders His Father For Accusing Him Of Stealing His Money
ALSO READ:  The Manner Nigerians Are Romancing With COVID-19 Is Right Time To Lockdown
A Ghanaian 12-year-old boy, Kwadwo Acquah murdered his...
Read more
Entertainments