Kogi Election: The Battle Is Over As Faleke , Endorses Gov Yahaya Bello For 2nd Term 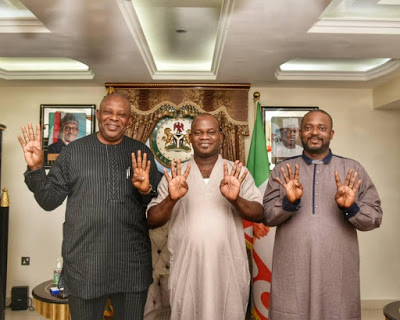 Honourable James Faleke has declared that he will support the reelection bid of Governor Yahaya Bello in Kogi state Legit.ng reports

Faleke made the declaration when he visited Governor Bello in Abuja on Sunday, October 6. The meeting was part of efforts for the ruling All Progressives Congress (APC) to record overwhelming victory at the gubernatorial election scheduled for Saturday, November 16.

A statement by the Kogi governor’s spokesman, Onogwu Mohammed, indicated that the two leaders discussed strategies to adopt for the polls. The meeting also had in attendance the APC deputy governorship candidate, Edward Onoja.
After the meeting, Faleke said even though he has no vote in Kogi, he still has numerous followers in the state.

He promised to reach out to his supporters in the state to ensure that they are fully mobilised ahead of the polls. He said he decided to work for the governor for the sake of unity in the APC.

Bello has been reaching out to several APC chieftains in the weeks leading up to the election.

The governor has so far gotten an overwhelming endorsement from many of the chieftains who were hitherto not aligning with him.

The endorsements received by the governor across political divides is said to have boosted his chances of being re-elected. This is also due to the unending internal wrangling within the Peoples Democratic Party (PDP).

The PDP has been facing serious internal crisis after its primary election ended in rancour, with many of the aspirants disputing the final result announced.

Despite a series of interventions by senior PDP chieftains across the country, party chieftains in Kogi state have refused to work together.

Analysts say despite being from a minority tribe, Belo might be cruising to victory if the PDP does not get their acts right before the election.

Facebook
Twitter
Pinterest
WhatsApp
Previous articleRevealed: Why Lionel Messi Could Be Banned From Playing In The UK
Next articleTurkey To Send Troops Into Northern Syria As US Pulls Out Of Area – White House

Nigerian actress, Angela Okorie has tie the knot with her fiance, Desmond a.k.a Chuchu in a romantic beach wedding.
ALSO READ:  Buhari Cannot Seek Third Term, He Is A Democrat, He Respects The Constitution - Presidency
Read more
Education