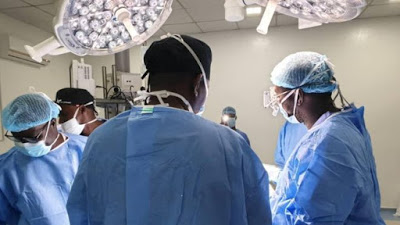 The Jos University Teaching Hospital (JUTH), at the weekend undertook its first surgery to remove brain tumor using a machine that drills the skull bone to gain access to the tumor.

“It is the first Trans-labyrinthine approach to a posterior fossa tumor. We used the C-Arm machine to drill the skull bone so as to see what is behind even while facing the front of the head.
“In the past, we had to open the brain which was always risky and led to deaths because the brain is delicate,’’ Dr Origoya Peter Binitie, the lead neurosurgeon in the operation in Jos  told The News Agency of Nigeria


He said that the tumor had been in the woman for three years before the surgery.


“Half of her face was affected and she could not hear with the ear affected,’’ he explained, adding that the operation was a combined effort by neurosurgeons, Ear-Nose-Throats (ENT), surgeons and the Anaesthetists.

Binitie, who described tumor as an abnormal growth of tissue largely outside the brain stem, said that the new approach helps the surgeons to navigate around the head to see all sides at the same time.

“In the past, we used X-rays to ascertain the position of every part of the head; that involved moving the X-ray machine up and down to, and from, the theatre.


“That process usually takes a longer time and will not give us the position of a bone or the tissue in real time. But with the new machine, it is very quick and saves more than two hours.


“The new device is also more accurate, can tell you exactly where you are and saves cost because you spend less time on anaesthesia which minimise the money you pay for that particular service.


“We can also ease our job by taking the picture up, down, front, back or sideways,’’ he explained.

Binitie, first neurosurgeon in northern Nigeria, who had been in service since 1974, said that the cost of such operation was “around N300,000 in JUTH’’.

“But it costs several millions of naira in other hospitals and even more when done outside Nigeria,’’ he said.

The expert said that there were a total of 90 neurosurgeons in the country, adding that more were being trained to meet rising demands.

“JUTH is one of the few centres training neurosurgeons in Nigeria. Six are currently being trained and are at various stages of the programme,’’ he said.

Binitie commended the management of JUTH for its efforts to improve services through acquiring modern equipment like C-Arm that would ease surgery and enable the hospital break new grounds.

Banwat said that a German NGO, Christofell.Blindmission (CBM), recently donated an operating microscope to be used by the ophthalmology (eye) department.

He said that the hospital was undertaking a free eye surgery for children which would end in September, adding that children requiring glasses would equally receive them.

“Parents should take advantage of this opportunity to correct any defect in the eyes of their children,’’ he told NAN.

Banwat, however, decried the poor funding of teaching hospitals, saying that much funds were required to purchase equipment, meet infrastructure needs, as well as for training and research.

ALSO READ:  VIDEO: Plane Crashed In Pakistan, Killing All 107 Members On Board

“We have several needs and want to improve services and break new grounds, but we cannot meet these needs with the budget we currently run.


“What we have is mostly an envelope system; what comes out of the appropriation is not encouraging at all.


“With more funds, we can operate optimally and provide quality service. The medical sector keeps moving and changing, with new grounds broken every day. We cannot afford to be left behind,’’ he said.