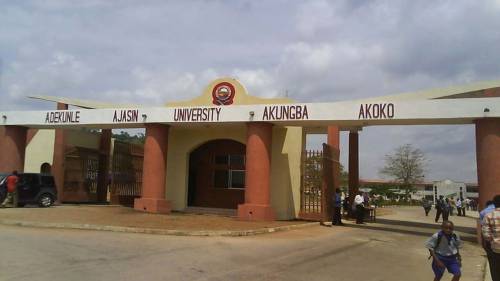 An infornmmation reaching us now had it that a female undergraduate of AAUA (Adekunle Ajasin University Akungba) Akoko, Ondo State was allegedly raped by some soldiers stationed at the military checkpoint in Ikare Akoko, Akoko North-East Local Government Area of the state.

The student, a 300-level in the department of Religious and African Studies, was allegedly harassed, molested and raped inside a post close to the military checkpoint.

A sources said the victim was raped while returning from the campus.

Freshreporters News understood that one “Lance Corporal Sunday” who was identified to be one of the soldiers has been arrested and also detained by the 32 Artillery Brigade.

The witness stated:
“We were travelling from Akungba in a minibus when the armed soldiers flagged us down at their checkpoint on Ikare road.


“Immediately, one of them searched our vehicle and loads and saw the lady (victim) and asked her to come down from the vehicle.


“While this was going on, there was silence inside the bus and when the lady came down, she was accosted to the military post.


“They later told others to move on while they held the lady hostage and out of fear, we had to leave the soldiers and the victim.


“An hour later, we began to suspect why they held the lady in a journey of fifteen minutes because nothing incriminating was on her. We later found out she was raped by the soldiers.”

He added that the student had been taken to the Ondo State Specialist Hospital in Ikare for treatments.

Olawale Oguntause, the chief medical director of the government hospital, confirmed that the rape victim was brought to the facility.

Oguntuase, however, refused to confirm or deny if the female victim was raped.

“As I am speaking to you, I can only tell you that the lady was brought to the hospital over a rape case. But the results of the medical examination carried out on her is not yet ready,”.

Victor Akinpelumi, the university’s spokesperson, said an investigation had been launched into the incident.

“The university has set up a panel to look into the matter,” he said.

A resident of Ikare, Ibrahim Ayodele, said he saw some enraged students when they came to report at the station.

“The incident is true because I saw the students in Ikare Police Station where they came to report the case. Many of them were angry and even threatened to protest the rape case by shutting down the road,” he said.

A police source in Ikare confirmed the rape case in a telephone chat.

He said some friends of the victim visited the station on Wednesday around 7 pm to lodge a complaint.

“Some students came and report the case here and we have started our investigation but we are taking the case to our headquarters in Akure.


“The victim even came with them to the station and mentioned the main culprit who masterminded the rape among the soldiers,” he said.

Femi Joseph, spokesperson for the Ondo State Police Command, said he had not been brief on the case.

Abubakar Zakari, the commandant of the 32 Artillery Brigade, said the rape allegation was a “blackmail” on his officers who are all manning the military checkpoint in Ikare.