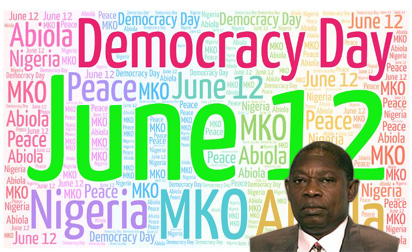 Here comes the 26th annual celebration anniversary of the June 12, 1993 presidential election is historic. It is the biggest, widest and most national since 1994, when the first anniversary was marked by pro-democracy activists in Lagos.

For the first time, the election, dubbed as the freest and fairest in the annals of balloting in Nigeria, and which marked a watershed in the electioneering process in the world’s largest Black nation, will be celebrated by the president of the country in Abuja with foreign heads of state participating.

In the last 25 years, June had been marked in Lagos and a few states in the South-West. For the first time June 12 is a national holiday. The annulment of the election won by late business tycoon, Chief MKO Abiola, by the General Ibrahim Badamasi Babangida regime in 1993, the death of Abiola’s wife, Kudirat via assassination in 1994 and Abiola’s death in detention in 1998 only served to deepen the struggle for actualization of June 12 and return to democratic rule.

When power returned to civilians in 1999, President Olusegun Obasanjo, who hails from Ogun State as Abiola, deflected calls to recognize June 12 and immortalize Abiola. The efforts of President Goodluck Jonathan to immortalize Abiola by naming the University of Lagos after him hit the rocks.

However, President Muhammadu Buhari broke the ice. With the support of the National Assembly, June 12 is now a public holiday and Democracy day.

As Nigerians celebrate the day, Vanguard spoke to one of Chief Abiola’s children, Dr. Wuraola Abiola and pro-democracy activist, Mr. Mike Igini, who shared their thoughts on the ideals of June 12, Abiola and the way forward for Nigeria.