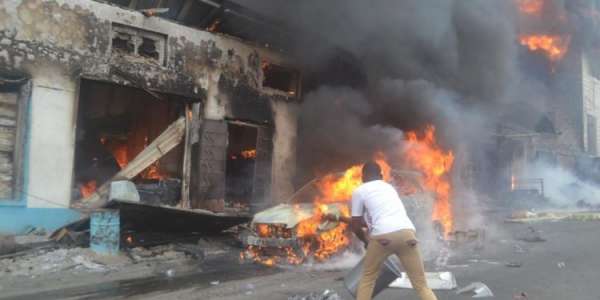 A terrified incident occur on Saturday in Igbogene area of Yenagoa LGA, Bayelsa State as a 40-year-old jealous lover, identified as Etifa Obukulubu, set ablaze the home of his girlfriend over suspicion of cheating.

An unidentified pastor who was working with the New Baptist Church and his female assistant were burnt to death in the fire incident.

All attempt to rescue those inside the building failed. However, the exit door out of the house was jammed from outside when the targeted girlfriend, identified as Wilberforce, reportedly vacated her home for the deceased pastor and his assistant who came from outside the state on an evangelical mission.

According to reports, the suspect, who is a commercial driver, had waited for his girlfriend to come home, “but maybe on sighting her with a man and another girl, he got angry and set the home ablaze.

A resident of the area said:

He waited for them to enter the house. And use fuel to set fire round the house. But he did not know that his girlfriend had left gone to sleep with another friend.

A young architect identified as Hlola Skosana took her after her relationship with a yet-to-be identified man hit the rock. The young south African lady...
Read more
Crimes

A teenager identified as Kelvin met his untimely death while trying to have an experience on how one dies by hanging in Lagos State. The...
Read more

The director-general of Nigeria Centre for Disease Control, NCDC, Dr Chikwe Ihekweazu, says there are possibilities that coronavirus (COVID-19) can be transmitted through the...
Read more
Load more