Home News General News It Is Wrong For A Man Who Lost Election To Call For...
NewsGeneral News 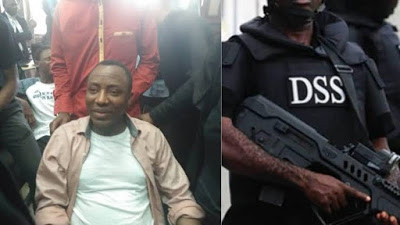 Omoyele Sowore‘s arrest by the DSS in connection with the planned nationwide protest he conveyed, which was tagged RevolutionNow Protest generated a lot of mixed reactions.

While others are calling for the activist’s release, some other groups have come out to support the detention of the RevolutionNow convener.

Reacting to Sowore’s arrest, the Muslim Rights Concern, MURIC, have thrown their weight behind the re-rest of Omoyele Sowore by the department of State Service, DSS, at an Abuja Federal high court.

According to the group, it was “improper” for a man who lost an election to lead a revolution against the winner of that same election just a few months later.

Sowore who contested for the 2019 presidential general elections on the platform of African Action Alliance, AAC,  was defeated by Muhammdu Buhari of the All Progressives Congress, APC, however Sowore, came fifth.

Sowore is an active member of civil society. Perhaps this is why human rights groups are in a hurry to castigate the DSS and call President Buhari names. But has civil society pursed to ponder on Sowore’s tactical blunder? We all must admit that it was improper for a man who lost an election to lead #Revolutionnow against the winner of that same election just a few months later. It amounts to seeking to gain by the bends what he could not get at the straight.

In our efforts to engage in dialogue over the Sowore furore, we were confronted with a statement purportedly made by the activist politician. He was alleged to have said on 25th July 2019, ‘I’m not talking of protest. I’m embarking on revolution. 85% of Nigerians are in support. Don’t tell me about legal implications or what a Judge will say. I don’t care. We must bundle Buhari out of that place…the DSS shall cease to exist!

If it is true that he said the above, those of us in civil society should have the courage to tell him that he went too far. We all know what has been happening across the globe. Algeria, Egypt, Libya, Tunisia, Spain, Venezuela, etc are examples. No nation takes a threat to security lightly.

As a human rights group, MURIC wants Sowore freed. We are for constitutionalism and rule of law. But national security must not be jettisoned. Those of us who are leaders of civil society must realise that we have a duty to lead responsibly. Radicalism must not shut the door against rationalism. We believe that Aluta must stop where any matter affecting national security starts.