Iran Blows Hot, As US Citizens Flee Iraq Over Tension 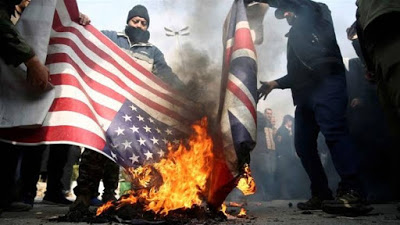 However, The US embassy in Baghdad had urged all its citizens to leave Iraq immediately.

Thousands of US citizens working for foreign oil companies in the southern Iraqi oil city of Basra left the country on Friday, the oil Ministry said.

Iraqi officials said the evacuation would not affect operations, production or exports.

ALSO READ: Iran Ready To Retaliate Death Of General, Killed By US

For the meantime, as preparations were being made for Soleimani’s body to be transferred to Iran, the flags at Iranian embassies abroad were ordered to fly at half-mast.

The date for the funeral has yet to be announced.

The legal, political, security, and military consequences of this crime is on the US government.

The costs that Washington has to pay will be much more severe than the mirage-like achievements of this sort of blind moves.