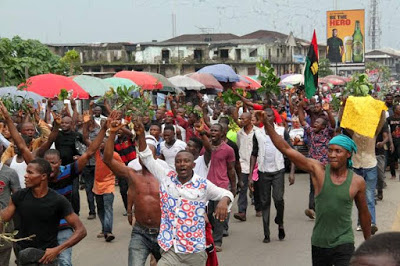 Freshreporters  had earlier reported a news where the Nigerian army accused the indigenous people of Biafra (IPOB) of fabricating a video. In the video which was circulated by IPOD showed how the Nigerian soldiers were killed by the terrorists group, Boko Haram.

Reacting to the accusations by the Nigerian Army, the Indigenous People of Biafra (IPOB) has hit back at the Nigerian army, warning it not to “drag” the group into its “pitiful plight”, in the fight against Boko Haram.

Spokesman of the group, Emma Powerful, stated this in a statement on Thursday, in reaction to claims made by the army, that it was behind the circulation of a recent video which showed Boko Haram insurgents killing Nigerian soldiers.

The security agency alleged that IPOB doctored the video as a tool for propaganda and that the incident did not happen in Nigeria.

Responding to the Army, Powerful said;

It is quite pathetic how the Nigerian army would belittle themselves in the eyes of the world by involving IPOB in their futile attempt to deflect attention from their failed effort to fight terrorism.

The Nigerian Army must understand that Biafra is not Nigeria. IPOB have more important things to do that engaging in doctoring a video that is so clear for all to see.

The video of Boko Haram torturing and humiliating the Nigerian Army … is real and verifiable. IPOB has nothing to do with the trending video.