‘I’m The Most Misunderstood Person In This Country’ – Okorocha Laments 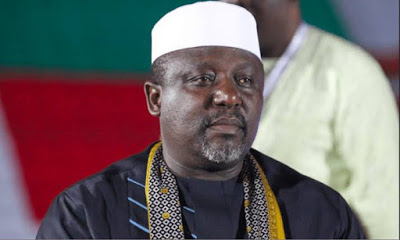 The former governor of Imo state and now senator representing Imo West senatorial district, Rochas Okorocha said he is ‘highly misunderstood’ person in Nigeria, owing to the feedback he gets from people who define him from different angles.

Okorocha stressed that since he ruled the state for eight years, no past or present governor is yet to do up to one-tenth of the projects he embarked on.

I wish you can meet the governor of Imo state (Emeka Ihedioha) and ask that Rochas said what he has done is not up to one-tenth of what I have done, or other governors put together have done.

the first international cargo airport in Imo state, I built it and it was adjudged the best in the country by FAAN.

I built 30 hospitals, some of them completed, while most are not completed, but they have all the roofs, tiled, except equipping; I built one of the best state high court, the best prison, the best police headquarters.

I know my nature, I am highly misunderstood in this country, and some people define me from different angles. If I do one-tenth of what the governor is doing there, the whole world will hear about it.

Speaking on the misunderstanding he had with the National Chairman of the All Progressives Congress (APC) Adams Oshiomhole, Senator Okorocha said;

I am yet to know the cause of the rift, stressing that he looks forward to hearing from the APC Chairman.

If I was told in my dream that I’ll be treated this way, I’d have said it’s not possible. One day, the opportunity may occur that I might hear from Adams what really went wrong because till today I am very much confused as to what went wrong.

I have tried to make an excuse for him that probably somebody must have gossiped or do something that he believed. Or alternatively, it must be a search for political power or relevance or it would have been who he is.

But whatever happened in APC was still like a dream to me, because APC had no reason to lose Imo state.