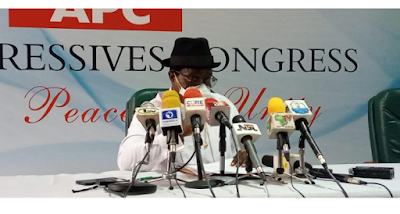 After a high court of the federal capital territory (FCT) reaffirmed Giadom as the acting national chairman of the APC but another high court in Rivers state restrained him from parading himself as such.

The APC chieftain, Victor Giadom, has written a letter to the chairman of the Independent National Electoral Commission, INEC, introducing himself as the  acting national chairman of the ruling party.

In a letter dated June 18, Giadom told INEC to serve all processes and documents concerning APC elections, as well as other correspondences on him.

Please note that the earlier of the FCT High Court suspending Comrade Adams Oshiomhole from office on March 4, 2020 as affirmed by the Court of Appeal, Abuja on June 16, 2020. Mr. Oshiomhole’s appeals were dismissed on that date. Copies of the orders of the court in the tow cases are herewith attached for your perusal.

As the acting national chairman of the party, all processes, documents, and communications including those concerning the conduct of elections meant for the APC are to be served on me.