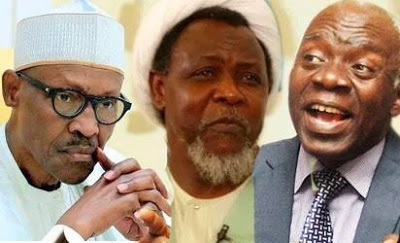 According to the judgment of the high court of Nigeria on 2 December 2016, Ibrahim Yaqoub El Zakzaky was ordered to be released from Department of State Services detention into police custody within 45 days.

El Zakzaky and his wife were to be paid the sum of 50 million Naira in compensation. The judge announced that the justification of “holding him for his own protection” is not sufficient.

On January 13, 2018, Zakzaky was detained at an unknown location without charges since December 2015, he made a short public appearance, his first in two years, being allowed to see his doctor.

In reaction to this, Mr Femi Falana, a senior advocate of Nigeria (SAN), has written a letter to the Attorney-General of the Federation, Abubakar Malami, demanding the release of the detained leader of the Islamic Movement of Nigeria (IMN), Sheikh Ibrahim El-Zakzaky and his wife, Zeinat.

Mr Falana asked President Muhammadu Buhari to honour the request to release Sheikh Zakzaky and his wife as proof that the president is operating in compliance with the rule of law.

In view of the recent decision of the federal government to comply with all court orders we have the instructions of our clients to request you to ensure compliance with the valid and subsisting orders of the federal high court and Kaduna state high court concerning them which are set out hereunder:

On December 2, 2016, the federal high court presided over by the Honourable Justice G. O. Kolawole (now of the Court of Appeal) declared illegal and unconstitutional the arrest and detention of Sheikh Ibraheem Elzakzaky and his wife, Hajia Zeinat Elzakzak by armed soldiers.

Consequently, the Court awarded them N50 million damages for their illegal detention, ordered the state security service to release them from custody forthwith and provide them with a house since the Nigerian Army had burnt down and demolished their house in Zaria, Kaduna State.

He also countered a claim by the AGF suggesting that El-Zakzaky’s release could only be facilitated by the Kaduna State Government.

He stressed that the AGF’s position failed to take cognisance of the fact that his office, the Presidency and the state security service had, up till last month, repeatedly given contradictory reasons to justify the disobedience to court orders for the release of the Sheikh.

He, however urged the Attorney-General of the Federation to use his good offices to review the government’s position and ensure the immediate and unconditional compliance with the valid and subsisting orders of the federal high court and the Kaduna State High Court concerning Sheikh Zakzaky.