I Sympathise With Buhari For Endorsing Ize-Iyamu – Obaseki 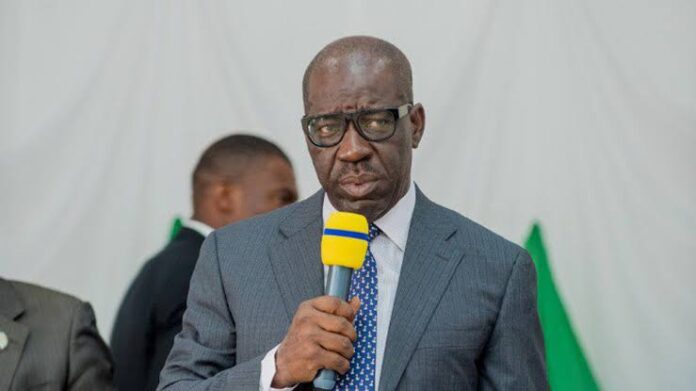 The Edo State Governor, Godwin Obaseki, has reacted to the endorsement of Osagie Ize-Iyamu, the candidate of the All Progressives Congress, APC, in Edo governorship elections by President Muhammadu Buhari.

Obaseki in a statement on Friday through his Special Adviser on Media and Communication, Crusoe Osagie.

He said it was disappointing and a dilemma that Buhari could endorse Ize-Iyamu.

Obaseki said he sympathised with Buhari for endorsing Ize-Iyamu despite facing trial for corruption to the tune of N700m.

He said Buhari only endorsed Ize-Iyamu in the interest of APC.

President Muhammadu Buhari on Friday confronted with a dilemma of no mean proportion, to raise the hand of Osagie Ize-Iyamu, candidate of the APC in the September 19 gubernatorial election taking place in Edo State.

The President was constrained to carry out the action, which indeed was a dilemma.

We sympathise with the President, who reluctantly handed the APC candidate, the party’s flag and unveiled him behind closed doors.

He handed over the APC flag to Ize-Iyamu after meeting with him and other APC party leaders.