‘I Suffer Mental Torture In EFCC Cell, Remand Me In Kuje Prison’ – Adoke To Judge 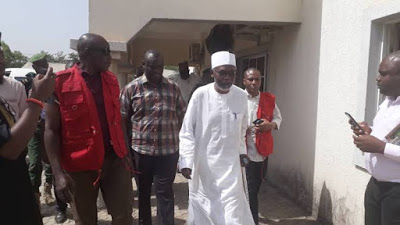 The former attorney-general of the federation, Mohammed Adoke is arraigned by the EFCC for allegedly receiving gratification to the tune of N300 million from Aliyu Abubakar in September 2013.

Adoke however denied the allegation, maintaining he is being persecuted for political reasons.

Appearing before the court, the former AGF has asked Binta Nyako, a judge of the federal high court in Abuja, to remand him in Kuje prison because he suffers mental torture in the custody of the Economic and Financial Crimes Commission (EFCC).

Counsel to Adoke, Mike Ozekhome, who argued his bail application, on Monday, asked the court to grant the defendant bail on self recognition.

Ozekhome said the bail terms should be favourable and liberal. He also asked the court to take into consideration the fact that the former AGF has been granted bail in another case by Abubakar Kutigi, a judge of the federal capital territory (FCT) high court in Gwagwalada.

According to him, where the bail application is refused or bail terms are not yet met, his client should be remanded in Kuje prison.

We also plead that he be taken to the Kuje Correction Centre, emphasis for Kuje prison pending when he meets his bail conditions to avoid the mental psychological strictures he goes through in the custody of the EFCC.

My lord we pray that he be granted bail in liberal and affordable terms and conditions so that he can take care of himself.

The law says, ‘come and stand trial’, it did not say ‘come and sit trial or come and prostate trial.

The judge, held that a suspect who has been arraigned before a court for trial, is now under the state.

Nyako maintain that, it is the court that exercises its discretion as to whether or not the defendant should be remanded in prison or not.

According to her, it is wrong to remand the defendant in the custody of the EFCC.

However, Bala Sanga, counsel to the EFCC,  had asked the court to remand Adoke in the custody of the anti-corruption agency, pending the commencement of trial.