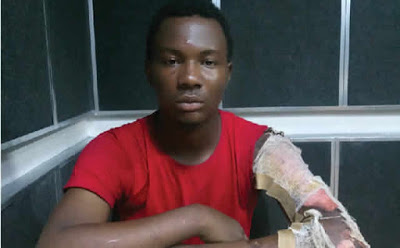 Victor Orji, a 18 years old from Benue state, who allegedly killed his 24 years old girlfriend, Mariam Alabi reveal what transpired and how he found himself in police net.

The suspect who is also an internet fraudster confessed he was into Internet fraud. And he has been doing it since 2016.

When asked what he use to make from internet fraud, Victor further confessed that what he used to get was not so much. At times, he get $1,500, at times $1,000. “I’m really good at saving, I don’t like going out, I might just stay at home for like three months and save”.

According to Victor, he prefer death to jail term, he said;

I’m scared but I know that between going to jail and facing death, I prefer death.

I prefer death. I cannot go to jail for two months. If I go to jail, my life will be messed up.

I prefer to be killed for killing my girlfriend, because that’s what everybody is saying now. They are saying something like “I’m not supposed to be human – that I must be an animal to have killed someone”. I didn’t even do it intentionally. But it has happened.