I Killed Him In Self-Defense — Jacinta Igboke Recounts 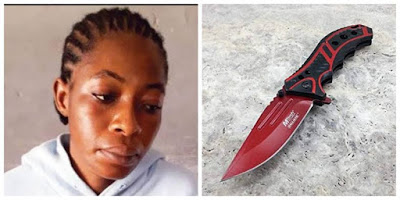 29-year-old Jacinta Igboke who is a teacher at a private primary school in Lagos was alleged to have murdered her estranged lover, Arinze Ani. Igboke stabbed Ani to death on Tuesday during an altercation at his shop on Old Ojo Road, Satellite Town area of the state.

The primary school teacher who is currently being investigated by the Lagos State Police for stabbing her baby daddy to death has explained that it was in self-defense.

It is learnt that, The relationship produced a boy, who is now 18 months old.

Recounting how it happened, Igboke said;

Trouble started when she went to Ani’s shop to collect money for the upkeep of their child. The encounter resulted in an argument that led to Ani’s death.

Immediately I got pregnant Ani’s parents were allegedly not in support of our relationship because she was older than him and he was supposed to marry a woman from his village in Enugu State. He was born on November 19, 1990, while I was born on 29 October 1990. They said they would only accept the baby.

I reported Arinze at the human rights section of the Satellite Police Station and he was invited for dialogue. At the meeting, it was resolved that she should live with him at his Ijegun residence, adding that their coexistence was fraught with quarrels.

Ani’s brother and sister lived with us, but the sister later left after she got married. Six months after I gave birth, I went out one day but when I came back, I found out that they had packed out.

I went back to the police station in July 2019 and they invited him. He said he didn’t want to marry me. The police told him he must take care of the baby and instructed him to give me N10,000, one carton of noodles and rice every month for his upkeep.

When I got to his shop, the first time he was not around. I then went to the market to buy some clothes for my child. I went back to the shop and showed him the clothes. I asked him to give me money so I could buy shoes and some other things the boy needed. He pushed me away and a bike almost hit me.

I entered his shop again angrily and he pushed me. I fell on the pavement and hit my head on the ground. I then picked up a knife in self-defense. I didn’t know when I stabbed him.

The suspect would be transferred to the State Criminal Investigation and Intelligence Department for further investigation.

We received a distress call that the woman allegedly stabbed her boyfriend on the right side of the chest, killing him in the process. A police team mobilised to the location where the suspect was rescued from a mob and the body of the victim recovered.

The body of the victim was taken to the mortuary for autopsy. The suspect and the victim were lovers and between them is a male child of about one and half years whose upkeep is believed to be the source of their constant quarrels.