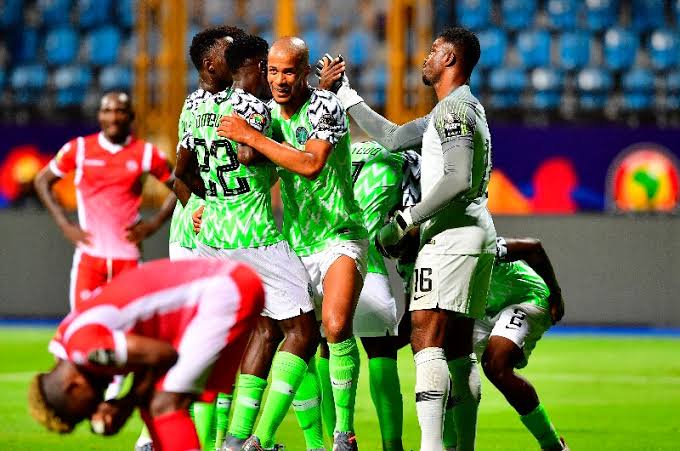 Super Eagles of Nigeria will on Wednesday, June 26, continue their campaign at the 2019 African Nations Cup with an encounter against the Syli Nationale of Guinea.

Odion Ighalo came off from the bench in the second half to score the winning goal for Nigeria in their first game against Burundi.

And even after the game, Super Eagles coach Gernot Rohr confirmed that Burundi were very tough for his wards.

Nigeria are topping Group B with 3 points after their first win in Egypt and they are prepared for their next game.

We will however take a look at the Super Eagles players who played against Burundi and see how many could return to first team against Guinea.

Eagles team vs Burundi
Daniel Akpeyi, Shehu Abdullahi, Troost Ekong, Kenneth Omeruo, Ola Aina, Wilfred Ndidi, Samuel Chukwueze, Mikel, Onuachu, Etebo and Iwobi.
These players all tried their best against Burundi in Super Eagles’s first game at 2019 Nations Cup, but some of them will not start against Guinea due to changes Gernor Rohr will make.

1. Shehu Abdullai out and Chidozie Awaziem in Bursaspor FC defender Shehu Abdullahi sustained an injury against Burundi and had to leave the pitch in the first half.
The former Kano Pillars star has not trained with Super Eagles since then and he is expected to be replaced with Chidozie Awaziem.

2. Onuachu out and Odion Ighalo in After scoring the winner against Burundi in the first game, many Nigerians questioned Gernot Rohr to explain the rationale that made Onuachu to start ahead of Ighalo.
And due to the calls, Odion Ighalo is expected to lead Nigeria's attack on Wednesday, June 26, against Guinea.

So as the case may be now, only two players are expected to be out from the Super Eagles team that defeated Burundi.