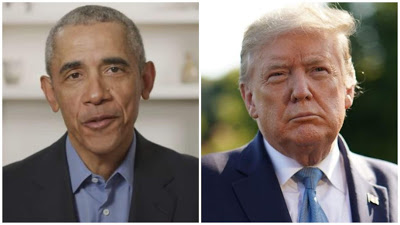 The United States now has 1.5m confirmed infections, with a total of 90,113 deaths.

The United States former President said this during a speech broadcast to high school and college graduates across the nation, suggesting that Donald Trump is not “even pretending” to be in charge.

Obama in a rare public criticism, said the pandemic has pulled back the curtain on a hard truth.

All those adults we used to think were in charge and knew what they were doing – it turns out they don’t have all the answers.

A lot of them aren’t even asking the right questions.

Do what you think is right.

Unfortunately, a lot of so-called grown-ups, including some with fancy titles and important jobs, still think that way — which is why things are so screwed up.

He spoke of how the public health emergency means that young Americans would “have to grow up faster than some generations.

This pandemic has shaken up the status quo and laid bare a lot of our country’s deep-seated problems.

From massive economic inequality to ongoing racial disparities to a lack of basic healthcare for people who need it.
It’s woken a lot of young people up to the fact that the old ways of doing things just don’t work.

That it doesn’t matter how much money you make if everyone around you is hungry and sick and that our society and our democracy only work when we think not just about ourselves but about each other.

With all the challenges this country faces right now nobody can tell you no you’re too young to understand or this is how this has always been done.