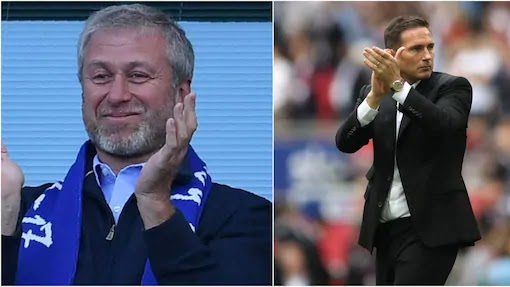 Frank Lampard is reportedly close to being named next Chelsea manager after agreeing to replace Maurizio Sarri at the club.

Both Sarri and the Stamford Bridge outfit have reached agreement to leave after just one season in charge of the Premier League side, thereby paving way for Lampard’s return.
The Italian born tactician has been named new Juventus boss after the Old Lady decided to pay the Blues a compensation fee this summer.

Club owner, Roman Abramovich, is now understood to have taken up the responsibility of finding the Italian’s successor and has since held talks with Lampard over the role.

Frank Lampard has agreed to begin his Premier League management career at Chelsea after receiving assurances from Roman Abramovich that he will be allowed at least two seasons to prove his worth at Stamford Bridge.

According to a UK Metro report, the Russian oligarch phoned the Chelsea legend and discussed the 40-year-old’s potential return to Stamford Bridge.

Abramovich reportedly promised Lampard that he will be given at least two seasons at Chelsea to steady the ship amid a looming two-window transfer ban.

The former England international made his managerial debut with Derby County last season and has thus far enjoyed a successful spell with them.

He nearly steered the Championship side to Premier League promotion before missing out on the final slot to Aston Villa after a 2-1 defeat in the playoff finals played at Wembley Stadium.

Would Frank Lampard be a good appointment for Chelsea? 🤔

Recall that Chelsea legend Frank Lampard has reportedly been tipped as the leading candidate to replace outgoing boss Maurizio Sarri this summer.

The Blues seems to have allowed their manager leave after being paid a sum of £7 million severance package by Juventus earlier this week.

Sarri replaced Antonio Conte at Stamford Bridge in 2018 and led them to Europa league triumph at the end of his first season at the club.
(Legit.ng)