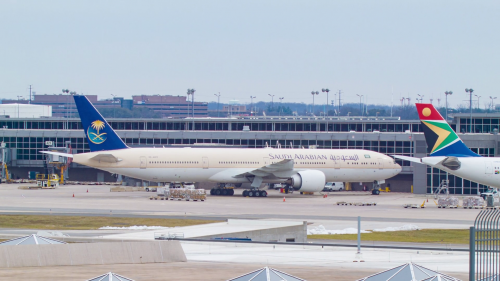 Saudi Air, Egypt Air, and Turkish Airlines led the pack of foreign carriers with the highest number of delayed flights in Nigeria between January and June 2019.
The three airlines were among other 30 foreign carriers that operated from Africa, Europe, America, and the Middle East between January and June 2019 into the country.
A report obtained from the website of the Nigerian Civil Aviation Authority (NCAA) over the weekend, indicated that Saudi Air, which had a total of 67 flights in the period, notoriously had 61 delayed flights, which was put at 91 percent of its total flights.
The airline, however, airlifted 32,934 passengers into and out of Nigeria within the first half of 2019.
Also, Egypt Air, which operated a total number of 423 flights, had 318 delays, representing 75.1 percent within the period.
The airline also had a poor record of baggage missing or delay in the first half of 2019 with 991 luggage, out of which 903 of the missing luggage were later recovered, while 88 of such luggage were never recovered, according to the report.
The North African airline, also had one pilfering issue, relating to passenger luggage, while airlifting 85,700 passengers within the period.
Besides, a Middle East carrier, Turkish Airlines, which operated a total number of 327 flights out of the Murtala Muhammed International Airport (MMIA), Lagos, had 233 delayed flights, which represented 71.2 percent of its total delayed flights from Nigeria.
The airline also cancelled one flight out of Nigeria within the period, which was 0.3 percent of its flights.
Like Egypt Air, Turkish Airlines also had 970 delayed/missing luggage of its passengers with 832 of such luggage later recovered, while 138 of such luggage were not recorded as recovered within the first half of the year.
It, however, recorded 106,395 passengers as inbound and outbound in the first half of 2019, the report said.
Air Namibia, which about two weeks ago suspended flight operations into Nigeria as a result of its diplomatic breakdown with Nigeria, operated 139 flights between January and June 2019 with 81 delayed flights, which represented 58.2 percent of its total flights out of the international wing of the Lagos Airport.
The Southern African carrier, also had 66 missing luggage in six months, while 54 of such luggage were later recorded as found, but 12 of the luggage were not recovered.
Another African carrier, Ethiopian Airlines within the period, had 54.6 percent of delayed flights out of its 505 flights operated into Nigeria with 276 delayed flights.
Others on the list of delayed flights in Nigeria are African World Airlines (AWA), 14 per cent, Air Cote D’Ivoire; 38.1 per cent, Air France; 41 per cent, Asky; 22.6 per cent, British Airways; 22 per cent, Camair-Co; 22.7 per cent, Cronos Air; 33.3 per cent, Delta Air Lines; 14 per cent and Etihad; 22.5 per cent,
Others were Kenya Airways; 27.8 percent, KLM; 41 percent, Lufthansa; 15.7 percent, Meridiana; 32 percent, Middle East Airline; 17.7 percent, Qatar Airways; 9.2 percent, Royal Air Maroc; 12.6 percent and Rwandair with 30.8 percent.
But, South African Airways, Virgin Atlantic Airways, and Emirates Airlines had the least percentage of delayed flights in Nigeria among the foreign carriers with 6.7, 7.2, 8 percent, respectively.
(Saharareporters)
ALSO READ:  PHOTOS: Many Houses, Valuables Destroyed As Communal Clash In Benue Turns Bloody
Facebook
Twitter
Pinterest
WhatsApp
Previous articleJUST IN: Group Storms UK Embassy, Protest $9.6bn Judgement(photos)
Next articleKperogi Farooq Reacts To Buhari’s Appointment Of Amina Zakari’s Brother As Minister, Son As Special Adviser