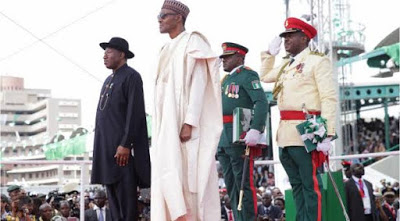 President Muhammadu Buhari begins his second stint as a democratically elected president following his victory in the February 2019 elections.

The incumbent president defeated his closest rival, Atiku Abubakar of the Peoples Democratic Party to be elected for a second term in office beginning from 2019.

During his 2015 inauguration ceremony following his defeat of Goodluck Jonathan, the president made some key statements and promises to Nigerians in his speech.

1. “Having just a few minutes ago sworn on the Holy Book, I intend to keep my oath and serve as President to all Nigerians. I belong to everybody and I belong to nobody.”

2. “A few people have privately voiced fears that on coming back to office I shall go after them. These fears are groundless. There will be no paying off old scores. The past is prologue.”

3. “Our neighbours in the Sub-region and our African brethren should be rest assured that Nigeria under our administration will be ready to play any leadership role that Africa expects of it.”

4. “I also wish to assure the wider international community of our readiness to cooperate and help to combat threats of cross-border terrorism, sea piracy, refugees and boat people, financial crime, cyber crime, climate change, the spread of communicable diseases and other challenges of the 21st century.”

5. “At home, we face enormous challenges. Insecurity, pervasive corruption, the hitherto unending and seemingly impossible fuel and power shortages are the immediate concerns. We are going to tackle them head on. Nigerians will not regret that they have entrusted national responsibility to us. We must not succumb to hopelessness and defeatism. We can fix our problems.”

6. “Furthermore, we as Nigerians must remind ourselves that we are heirs to great civilizations: Shehu Othman Dan Fodio’s caliphate, the Kanem Borno Empire, the Oyo Empire, the Benin Empire and King Jaja’s formidable domain. The blood of those great ancestors flow in our veins. What is now required is to build on these legacies, to modernize and uplift Nigeria.”

7. “There is now a national consensus that our chosen route to national development is democracy. To achieve our objectives, we must consciously work the democratic system. The Federal Executive under my watch will not seek to encroach on the duties and functions of the Legislative and Judicial arms of government. The law enforcing authorities will be charged to operate within the Constitution. We shall rebuild and reform the public service to become more effective and more serviceable. We shall charge them to apply themselves with integrity to stabilize the system.”

8. “For their part, the legislative arm must keep to their brief of making laws, carrying out over-sight functions and doing so expeditiously. The judicial system needs reform to cleanse itself from its immediate past. The country now expects the judiciary to act with dispatch on all cases especially on corruption, serious financial crimes or abuse of office. It is only when the three arms act constitutionally that government will be enabled to serve the country optimally and avoid the confusion all too often bedevilling governance today.”

9. “Elsewhere relations between Abuja and the States have to be clarified if we are to serve the country better. Constitutionally there are limits to powers of each of the three tiers of government but that should not mean the Federal Government should fold its arms and close its eyes to what is going on in the states and local governments.”

10.“My appeal for unity is predicated on the seriousness of the legacy we are getting into. With depleted foreign reserves, falling oil prices, leakages and debts the Nigerian economy is in deep trouble and will require careful management to bring it round and to tackle the immediate challenges confronting us, namely; Boko Haram, the Niger Delta situation, the power shortages and unemployment especially among young people.”

11.“For the longer term, we have to improve the standards of our education. We have to look at the whole field of medicare. We have to upgrade our dilapidated physical infrastructure.”

12. “The most immediate is Boko Haram’s insurgency. Progress has been made in recent weeks by our security forces but victory cannot be achieved by basing the Command and Control Centre in Abuja. The command centre will be relocated to Maiduguri and remain until Boko Haram is completely subdued. But we cannot claim to have defeated Boko Haram without rescuing the Chibok girls and all other innocent persons held hostage by insurgents.”

13. “No single cause can be identified to explain Nigerian’s poor economic performance over the years than the power situation. It is a national shame that an economy of 180 million generates only 4,000MW, and distributes even less.”

14. “Unemployment, notably youth un-employment features strongly in our party’s manifesto. We intend to attack the problem frontally through revival of agriculture, solid minerals mining as well as credits to small and medium size businesses to kick – start these enterprises. We shall quickly examine the best way to revive major industries and accelerate the revival and development of our railways, roads and general infrastructure.”

Freshreporters.com had earlier reported the arrival of dignitaries at the Eagle Square in Abuja, venue of the May 29 swearing-in ceremony for President Buhari and Vice President Osinbajo’s second term.