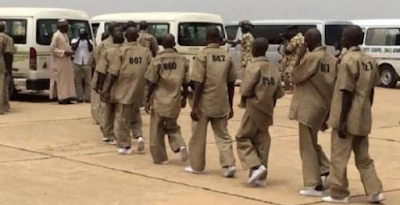 A total 603 repentant Boko Haram fighters are billed to be reintegrated back into the society in July.

According to the Defence Headquarters on Thursday, the soon to be released repentant Boko Haram members have completed the Deradicalisation, Rehabilitation and Reintegration programme.

This was revealed by Major-General John Enenche, spokesperson for the Defence Headquarters, stating that the DRR programme under Operation Safe Corridor had recorded tremendous success judging from the feedback from previous trainees.

The army spokeperson added that OPSC had admitted 893 ex-combatants for the programme out of which 280 including two Chadians had been successfully reintegrated back into the society through their respective national and state authorities.

Presently, there are 603 of them undergoing the DRR programme and would be graduating by July 2020.

The operation is a success story as feedback from those reintegrated are positive.

A particular one in Bama who learnt barbing as a vocation has successfully empowered four locals and is happily married with children.