Father Of 17 Impregnates Daughter In Ogun 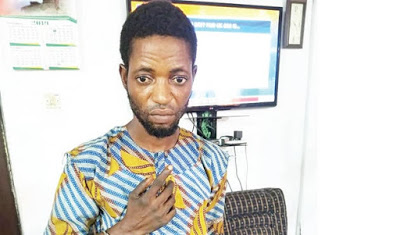 A 42-year-old man identified as Taofeek Oyeyemi has been arrested by the men of the Ogun state Police command for allegedly impregnating his 16-year-old daughter.

After involving in such an abominable act, Mr Oyeyemi took the victim to a quack doctor to procure abortion after discovering that she was pregnant for him.

It can be gathered that The suspect is the father of 17 children from different women.

Taofeek was arrested after the daughter reported the abortion to her mother, The Police Public Relations Officer in the state, DSP Abimbola Oyeyemi reveal on Thursday.

The Police explained that it was the mother, who reported the matter at the Ewekoro Police Station and the suspect was subsequently arrested.

The PPRO stated that the victim had been bleeding since the abortion was performed on her.

According to PPRO In a statement;

A 42-year-old man, Taofeek Oyeyemi, has been arrested by operatives of the Ogun State Police Command for impregnating his 16-year-old daughter.

The suspect was arrested following a complaint by the mother of the victim, who reported at the Ewekoro Police Station that her daughter, who was living with her ex-husband, informed her that she was impregnated by her father, who also took her to a quack medical practitioner for abortion.

She explained that since the abortion was carried out, the victim had being bleeding.

On the strength of the report, the DPO, Ewekoro Division, SP Rotimi Jeje, detailed his JWC section to go after the suspect and he was eventually arrested.

The suspect, who was said to have 17 children from different women, on interrogation confessed to have slept with the victim several times, which resulted in her pregnancy.

In order for his secret not to be exposed, he decided to procure an abortion for the girl.

Preliminary investigation revealed that the victim’s mother had separated from the suspect years back and the victim had been living with her until about six months ago when the suspect forcefully took the girl away from her mother.

All efforts made by the mother to take custody of her daughter proved abortive. It was when the mother came to visit her daughter that she discovered the great atrocity committed by the suspect against the daughter.