Failure In Marital Life And Business Made Me Attempt Suicide 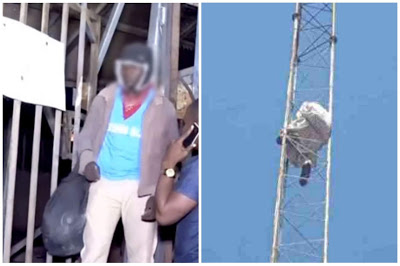 Following the incident which occurred on Friday in Jalingo, the Taraba State capital in the north-eastern part of the country, of a man who climb a telecommunication mask in a bid to get T. B Joshua’s attention.

however, the man made a demand that he would only terminate the suicide mission if the founder of Synagogue Church of All Nations (SCOAN), Prophet T.B. Joshua, intervened in his case.

The father of two who was later identified as Joseph Stephen came down at exactly 8:00 pm on Saturday.

The 43-year-old man has blamed failures in his marital life and business as reasons why he chose to take his life.

He added that his long stay on the mast is in a quest to get the attention of the Man of God in charge of Synagogue Church of all nations SCOAN.

According to his wife, he left home on Friday, saying that he wants to travel to Lagos to see the man of God, not knowing that he will go to the telecommunication mast.

She said she is totally surprised and frightened by the news of his action.

His action to step down followed the police and DSS’s decision to invite his wife with convincing pieces of evidence that the SCOAN have sent down a delegation to take him to Lagos.