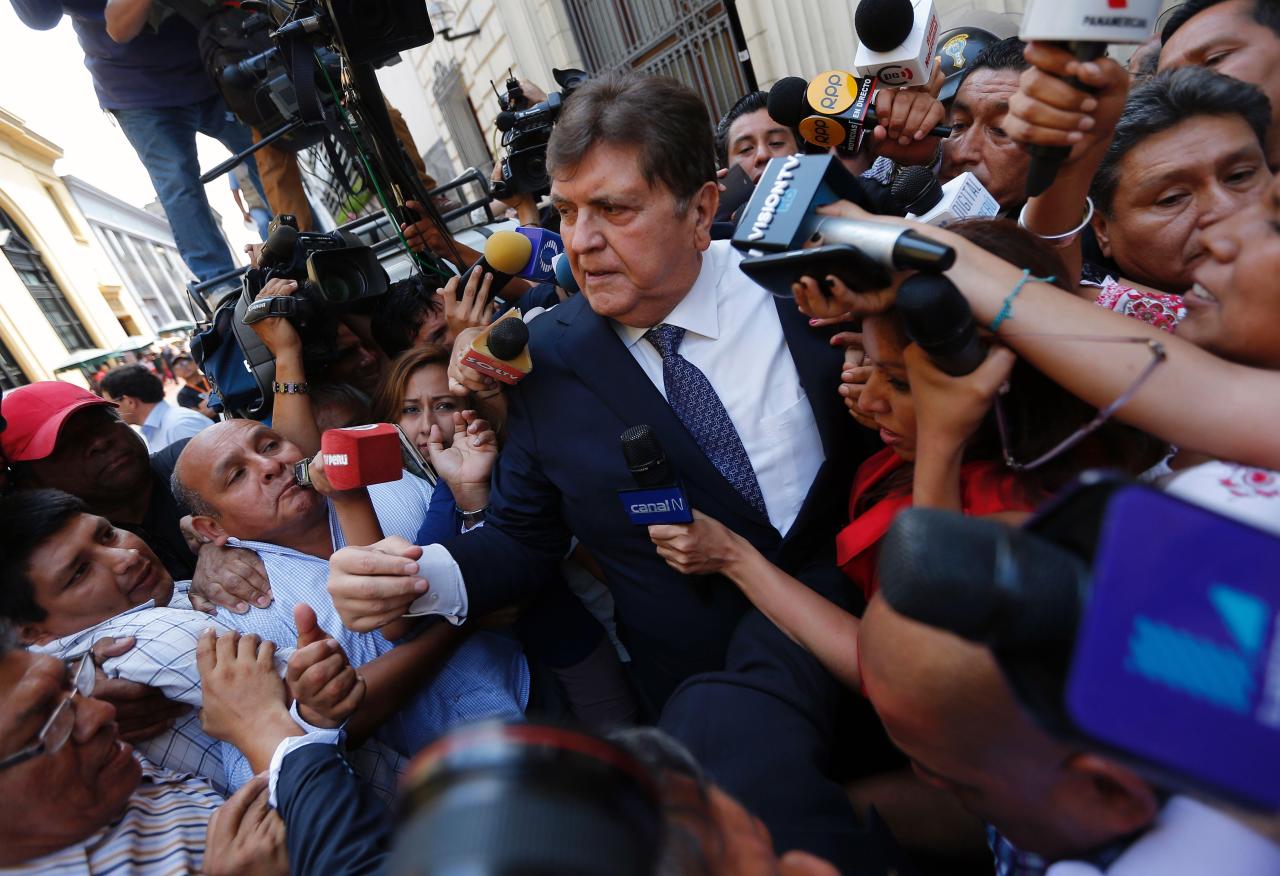 Former Peruvian President Alan Garcia shot himself in the head and died Wednesday as officers waited to arrest him in a massive graft probe that has put the country’s most prominent politicians behind bars and provoked a reckoning over corruption.
Fresh Reporters News gathered that there were authorities present who broke through a door at Garcia’s mansion in a leafy, upscale neighborhood of the Peruvian capital after hearing gunfire. The 69-year-old former head of state was rushed to a hospital, where a team of doctors performed emergency surgery but could not save him.
“The president, upset over this situation, knowing his absolute innocence … had this terrible accident,” said his lawyer, Erasmo Reyna.
It was a shocking end for a man who twice ruled Peru – once in the 1980s and then again more than two decades later. In more recent years, he became ensnared in Latin America’s biggest corruption scandal, a sweeping investigation of politicians’ dealings with the Brazilian construction giant known as Odebrecht.
No country outside Brazil has gone as far in prosecuting politicians tied to Odebrecht, which admitted in a 2016 plea agreement that it paid nearly $800 million throughout Latin America in exchange for lucrative public-works contracts.
In Peru, politicians have described the accusations as a political witch hunt. Prosecutors and anti-corruption advocates insist the arrests show the South American nation is finally holding leaders accountable.
ALSO READ:  The Only Surviving Wife Of First Nigerian Prime Minister Tafawa-Balewa's Dies

Several leaders called on Peruvians to set aside politics as the nation mourns the one-time populist firebrand whose second presidency helped usher in a commodities-led investment boom.
“It doesn’t matter your political hue, Peru is in mourning,” politician Gilbert Violeta wrote on Twitter. “This is a tragedy for our country.”
Condolences poured in from throughout Latin America as leaders recalled a man who at his peak was called the John F. Kennedy of Latin America.
“With virtues and imperfections, he realized great changes that allowed Peru’s economy to become one of the fastest-growing in Latin America and in the world,” former Mexican President Felipe Calderon said.
Garcia was born into a middle-class family in the capital, the child of a politician father whose party became Garcia’s own. He went on to a career marked by epic triumphs and devastating setbacks, a rollercoaster of a political life fueled by his charisma and capacity for reinvention.
Ultimately, though, the former president was an increasingly isolated figure. As investigators closed in, he argued that he was the victim of false testimony about taking bribes from Odebrecht during the construction of Lima’s metro. He had not been formally charged.
(Sfgate)
Facebook
Twitter
Pinterest
WhatsApp
Previous articleUp to 90 Boko Haram Terrorist Killed By Nigerian-Cameroonian-Chadian Warriors
Next articleEkiti State Former Gov. Fayose Easter Message To Nigerians