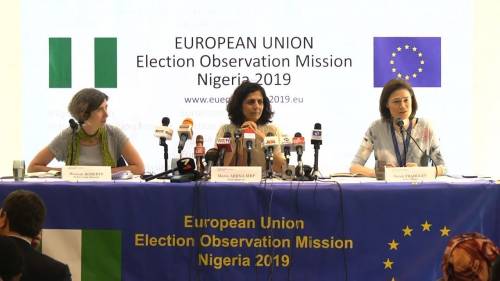 Four months after the presidential, parliamentary and governorship elections in Nigeria, the European Union Election Observation Mission (EU EOM) has submitted its findings and recommendations to the Nigeria electoral body(INEC).

Our source reported that the submission of the report was done by the EU Chief Observer, Maria Arena.

Mrs Arena while submitting the report to INEC Chairman, Prof. Mahmood Yakubu in Abuja, gave the assurance that the union would reveal the details of its report later today.Mrs Arena also said that the union had been part of Nigeria’s electoral process since 1999.

Freshreporters News Understands that the union deployed 73 observers to 223 polling units and 81 collation centres in 22 states for the 2019 general elections.

Receiving the report, INEC chairman also noted that the EU had been part of Nigeria’s steady progress towards democratic consolidation since 1999.

The INEC Chairman said that the commission had adopted the EU recommendations on previous elections.

Yakubu further said the recommendations included simultaneous accreditation and voting processes on election day, adding that it was first used for the 2015 Bayelsa governorship election and subsequent elections in the country.

He said the observations and recommendations of the EU election observation mission to the 2015 general elections were particularly useful.

He gave the assurance that the recommendations on 2019 elections would form the benchmarks in the reform to be submitted to the National Assembly.

“Every election in any democracy around the world is work in progress. We, therefore, look forward to the full EU EOM report and recommendations on the elections. We are confident that there will be useful lessons for the commission as we prepare for future elections.

“Indeed, the report is coming at the right time as it will feed into our ongoing review of the conduct of the elections. Let me assure you that the commission will again quickly focus attention on the electoral legal framework in addition to several other areas of reform.

We will study in detail all your recommendations as part of our ongoing internal review of the 2019 general elections which we hope to conclude in the next two months,” he concluded.

The INEC Chairman commended the EU for its interest in Nigeria’s democratic processes.