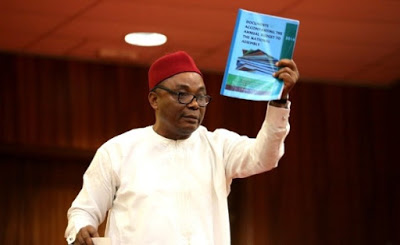 The National and State House of Assembly Election Petitions Tribunal in Asaba, Delta State capital has dismissed the petition filed by Doris Uboh of the All Progressives Congress (APC), against Senator Nwaoboshi.

The Tribunal upheld the election of Senator Peter Nwaoboshi of the Peoples Democratic Party (PDP), declaring him the rightful winner of the Delta North Senatorial District at the National Assembly.

It was made known that Senator Nwaoboshi polled over 180,000 votes in the election held on Saturday, February 23, 2019 while Uboh scored about 30,000 votes – ThisDay

Uboh then approached the Tribunal, claiming that Nwaoboshi should not have won.

The tribunal said the petition stood dismissed for being statute barred and lacking in merit.

The ruling was handed down by chairman of the three-man panel, Justice E.I. Ngene, who held that there was merit in the objection raised by Senator Nwaoboshi against the competence of the petition and jurisdiction of the tribunal to entertain it having been filed outside the time provided for by law.

Justice Ngene noted that none of the allegations of malpractices made by the petitioner was substantiated or proved beyond any reasonable doubt.

The tribunal also said that the petition was vague, ambiguous and therefore lacked merit.

Meanwhile, it was reported earlier that the Governorship, National and State Houses of Assembly Election Petitions Tribunal in Sokoto has dismissed the petition of Sen. Ahmad Maccido.

Sen. Maccido who contested for the Sokoto Central Senatorial District under the platform of the Peoples Democratic Party (PDP), during the 2019 general election but lost, had challenged the winner of the election, Sen. Aliyu Wamakko of the All Progressives Congress (APC).

Maccido approached the tribunal alleging that the election was marred by irregularities and non-compliance with laws.

In his judgment, Justice Peter Akhihiero, held that the petitioner was unable to discharge the burden of proof with satisfactory evidence.
Newswatch