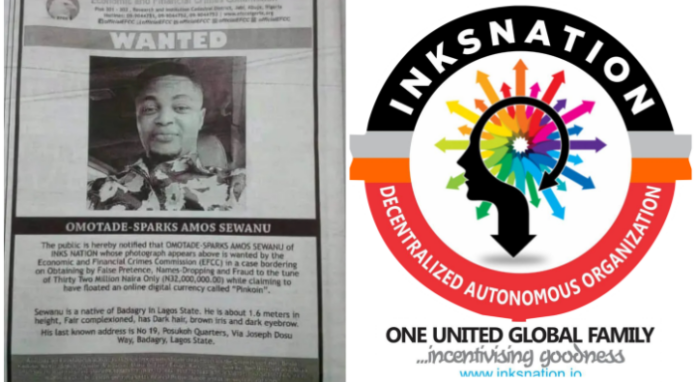 The inventor of Inksnation Pinkoin, Omotade-Sparks Amos Sewanu, has been declared wanted by the Economic and Financial Crimes Commission EFCC.

Although the Securities and Exchange Commission of Nigeria has fore classified the activities of Inksnation Illegal and fraudulent in a press release dated 26/06/202. SEC said, The attention of the Commission has been drawn to the activities of iBSmartify Nigeria the promoters of a Blockchain known as iBledger (iBcashcryptocurrency) and InksNation.

The general public is hereby advised that neither the promoters of iBSmartify Nigeria nor the illegal products they offer are registered or regulated by the Commission.

In view of the above, the general public is hereby WARNED that any person dealing with the said entity and others in the same business in any manner whatsoever, does so at his/her own risk.

In a Press Release dated the 11th of November 2020, The Economic and Financial Crimes Commission declared the founder Omotade-Sparks Amos Sewan wanted for series of financial frauds.

The Public is hereby notified that Omotade-Sparks Amos Sewanu of Inksnation whose photograph appears above is wanted by the Economic and Financial Crimes Commission EFCC in a case bordering on obtaining by false pretense, names Dropping and Fraud to the tune of thirty Two million Naira Only (32,000,000) while claiming to have floated an online digital currency called “Pinkoin.

Sewanu is a native of Badagry in Lagos, he is about 1.6 metres in height, fair complexioned, dark hair, brown iris and dark eyebrow.

The Nigerian police have bursted another baby factory in Ogun state, just few days after 10 victims were rescued from one at Ofada, Mowe,...
Read more
Crimes

A final year student of political science at the Nwafor Orizu College of Education, Nsugbe, NOCOED, was found dead just some days away from...
Read more
Crimes

A 47-year-old man identified as Emmanuel Thompson Udo, have been sentenced to life imprisonment for having forceful canal knowledge of his 14-year-old stepdaughter. The rapist...
Read more
Crimes

The Abuja Zonal Office of the Economic and Financial Crimes Commission, EFCC, on Wednesday, December 2, 2020, arraigned three suspects before Justice A. I....
Read more
Crimes

Man Rapes 11-year-old Girl, Threatens To Beat The Victim And Her Mother In Akwa Ibom (Photos)

An unnamed 11-year-old girl is alleged to have been raped by an unidentified man in Eket Akwa Ibom state. A twitter user identified as @deebadniceguy...
Read more
Crimes

A Woman was arrested in Brazil after her baby bump turns out to be a watermelon filled with cocaine. PROMO SALES to round up the...
Read more