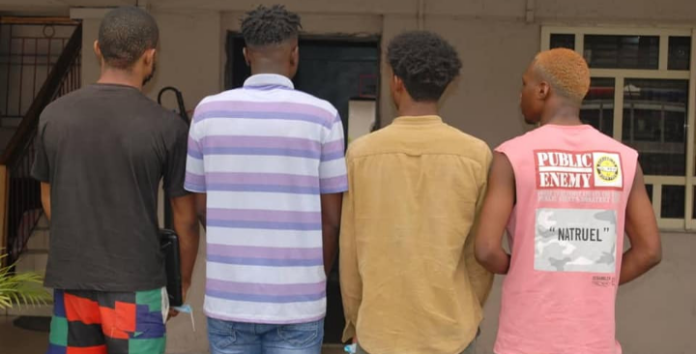 Operatives of Economic and Financial Crimes Commission, EFCC have arrested 4 students of the University of Port Harcourt for involvement in internet fraud.

The quartet, defrauded 15 victims of $111,500. They are identified as Prince Hyacinth; Rex Emadifie Oghene, Odili Ifeayi and Uduak Samuel Williams.

The fraudsters were picked up on Thursday, August 20, 2020, from their hideout at Chibiak Avenue, Elenpranwo, Ada George, Port Harcourt.

A preliminary investigation established that the suspects are majorly involved in a romance scam and also act as pickers for organized ring of fraudsters.

While Prince Hyacinth parades himself as a Spain-based marine engineer to bait his victims, Rex Emadifie Oghene poses as a rig engineer based in the United State.

The two other suspects, Odili Ifeayi and Uduak Samuel Williams present themselves as rig/marine engineers to defraud their victims.

The suspects will be charged to court as soon as investigation is concluded.