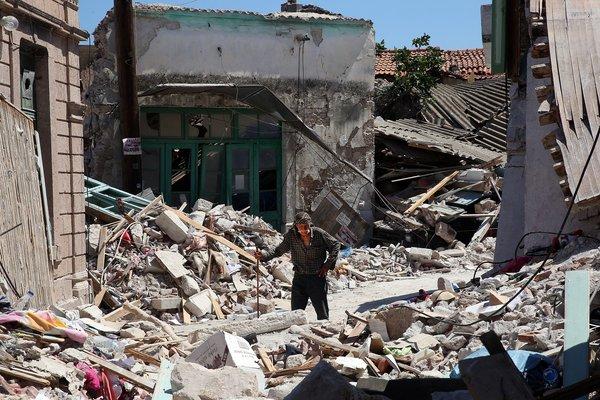 This report according to the Turkish quake monitored how a moderate 5.6 magnitude earthquake had strucked the western province of Denizli today in Turkey.
The earthquake left some buildings damaged, also scattering bricks and tiles to the ground in that rural area. But all glory to God that no live was lost.

The Disaster and Emergency Management Authority whi had said that the quake in Acipayam, in the Denizli state was accompanied by 2 aftershocks.

“The earthquake which actually struck at 9:34 a.m (0634 GMT), was about 5 kilometer deep and followed by four aftershocks between 4.2 and 3.4 magnitude” – Turkish Observatory

It was recorded by the United States Geological Survey that the quake was magnitude 5.7 while the European monitoring station got a track at 6.4 magnitude.

“This is the biggest quake that I felt, I was outside but it was shaking very much,” Sahin Agah, 30, resident of the town of Acipayam near the epicenter, told Reuters by phone.
“I saw some roof tiles, bricks and solar water heaters fell from the roofs.
“There are some cracks in buildings. I did not see any building collapsed. Everyone is outside,” Agah said.


Administrators from the districts of Ucari and Yenikoy, the epicenter of the quake, said on NTV some 20 buildings and houses were damaged.

“The impact of the quake was felt throughout the Aegean region and south of the Marmara Sea” – State news agency Anadolu reported.


Some officials were still assessing the damage.
Yenikoy resident Muharrem Gezi said there was minor damage in his village.
“I saw some chimneys broken and roof tiles falling on the streets.
“Some garden walls collapsed as well. Everyone is scared and outside. No one is injured,” he told Reuters.

Recall that Turkey had suffered some  regrettable earthquakes in the past, like the one that struck near Istanbul in 1999 killing more than 17,000 people.

What do have to say about this???
Kindly share this pos!.