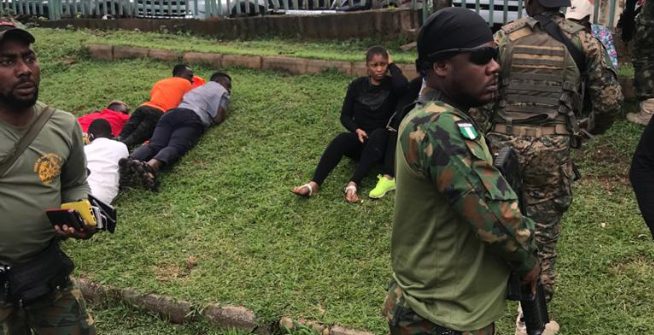 The Department of State Services, DSS, has obtain an order to detain 7 arrested Revolutionnow movement members in Osun state.

If the order go through, the RevolutionNow protesters will be detained for another 14 days.

He said despite the detention order, application for bail could still be entertained.

The DSS got ex parte order to detain them (the protesters) for 14 days pending the conclusion of investigation.

A lawyer I sent there earlier brought back that report.

The lawyer spoke with the Director and they said he should talk to the Legal Officer.

They said despite the detention order they got, application for bail can still be made.

They asked him to come back tomorrow (Thursday)

Wike Blows Amaechi: “You Should Be Jailed By Now, Not A Minister”

#Nigeria @60: We Have Cracks That May Break Us, VP Osinbajo Speaks

The Vice President of the Federal republic of Nigeria, Yemi Osinbajo has revealed that Nigeria may break up if decisive actions are...
Read more
Politics

According to a Nigerian rights group there that upto 15 corruption case files are missing in the office of Justice Minister, Abubakar...
Read more
Politics

As the Ondo State election date draws nearer there have been a lot of preparations both outward and inward going on. One...
Read more