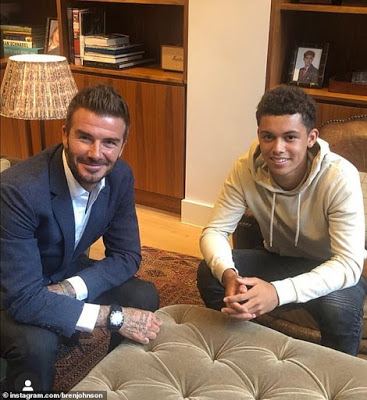 According to the Daily Mirror, David Beckham, 44,  plans to make Lionel Messi and Luis Suarez his major signings in the club that will start operations in 2020, has teamed up with his old friend Dave Gardner and ex-PR chief Nicola Howson to form Footwork Management Limited.

He is also set to partner with agent David Johnson and was pictured with Johnson’s son Brennan just days before the teenager signed a new contract at Nottingham Forest.

Beckham due to his ownership of Inter Miami, and his part ownership of Salford City FC, cannot be a licensed agent due to strict FIFA rules, but with his partnership with Howson and Johnson, they can start and finish off deals.

He plans to sign Manchester united’s Mason Greenwood as his first client, before moving on to other more stellar names.

Beckham retired front football in 2013 and ever since then has been a UN ambassador and joined ex-teammates Ryan Giggs, Gary Neville, Paul Scholes and Nicky Butt to buy Salford City Football club.
LIB