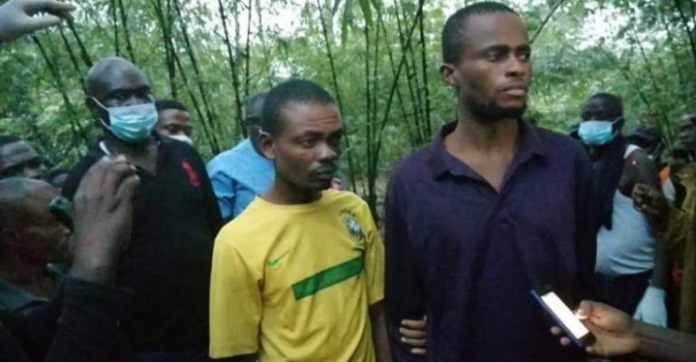 The suspects who are also oil thieves accused them of feeding the police with information about their illegal bunkering activities in the state.

The kidnap victims, Baridomale Sunday Tor, Baridon Gbarabera, and Barisiton Nawee, were said to have been buried alive with their mouths and hands tied by their abductors on March 14.

The men were declared missing after they failed to return home.

The two suspected cultists, Barididum Danaa, aka ‘kill and bury’ and his accomplice, Prophet Nkpe, both members of the dreaded Degbam Cult group, were arrested and they led men of the Anti-cultism Unit of the Police Command to the area where the three bodies were exhumed.

When interrogated, the suspects admitted they were members of Deygbam Cult group and that they tied the victims’ hands and legs and buried them alive in shallow well.

Barididum Daana confessed that the three victims were buried alive because they discovered that they were informants to security agencies about their illegal oil bunkering activities in the area.

3 Dead As Over 200 Naked Inmates Escape Jail Police in Ugandan are searching for more than 200 naked...
Read more
Society News

Storey building collapse in Abia killing 4, Many trapped. The three-story uncompleted building on Azikiwe road in Aba is a refuge for...
Read more
Society News

A 25-year-old man drowns in Kano State while bathing in a river at Zangon Buhari in Bunkere Local Government Area of Kano...
Read more