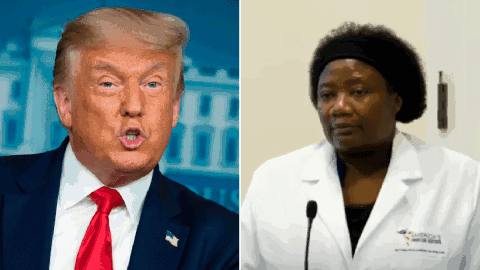 The U.S President, Donald Trump has said that Dr. Stella Emmanuel’s claims on Covid-19 cure should not be waived over, holding on the results that the Hydroxychloroquine based treatment had produced to her.

Trump disclosed this on Tuesday during the Covid-19 response press briefing while responding to a question from a CNN reporter, Kaitlan Collins, who had asked his position on her claims.

Stella, under the influence of the America Frontline Doctors, had recently alleged that Hydroxychloroquine, Zinc, and antibacterial drug, Zithromax, were effective cures for the Covid-19.

She claimed to have cured 350 Covid-19 patients with those drugs. However, one of the country’s health experts, Dr Fauci, on Tuesday, debunked her claims, adding that clinical trials of the drugs proved that it were not a cure for Covid- 19.

The World Health Organization (WHO) had also stated that there was no cure for Covid-19 at the moment. But President Trump maintained that a doctor with such success in Covid-19 treatment had something to say.

“Maybe it’s the same or maybe it’s not but I can tell you this: She was on air, along with many other doctors, and they were big fans of hydroxychloroquine.

“And I thought she was very impressive in the sense that from where she came, I don’t know which country she comes from but she said that she’s had tremendous success with hundreds of different patients and I thought her voice was an important voice but I know nothing about her”, he said.

The video which was also posted on our FreshReporters Facebook group was equally taken down. Should we say there is an element of Truth in Dr. Stella Immanuel’s new claim?

Lagos Announces Date For Reopening Of Churches And Mosques

Lagos State government has on Saturday announced date for reopening of worship centers in the state The state...
Read more
Foreign News

Trump to ban Tiktok today over security concerns. The US president Donald Trump says he will ban the...
Read more
Health

After 11 Days In Isolation, Fayemi Recovers From COVID-19