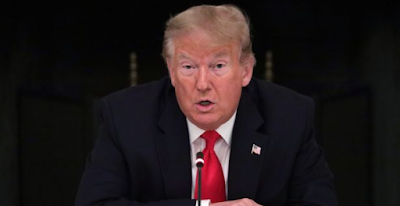 United States President, Donald Trump claims coronavirus may have been spread on purpose by China and believes some Americans wear face masks to oppose him.

According to Trump, there’s a chance it was intentional in relation to the Covid-19 pandemic which began in Wuhan last year, adding that China may have been motivated by their economy being in a “mess” while in contrast America’s was “blowing them away”.

They’re saying, man, we’re a mess. The United States is killing us. Don’t forget, my economy during the last year and a half was blowing them away. And the reason is the tariffs.

Trump on the introduction of widespread testing, said;


I personally think testing is overrated, even though I created the greatest testing machine in history.

Trump said he discourages mask wearing because it could help to spread the disease.

And then they don’t know how they caught it?