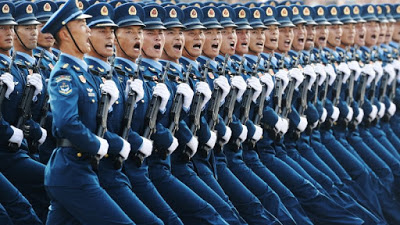 The People’s Republic of China on Tuesday celebrated its rising economy, power and world confidence in grand style with an elegant display of its military hardware and highly numbered troops.

The programme overseen by the Chinese president, Xi Jinping marks the 70th birthday of China’s development. Xi pledges continuous peaceful development in the country. Such reassurance is needed for the country facing mounting challenges especially in Hong Kong where anti-government protests has extended for about four months now.

Without forgetting its trade war with United States which has resulted in an increase of tariffs from both sides. According to a Reuters report, Xi, dressed in a slate gray “Mao” suit and accompanied by his predecessors Hu Jintao and Jiang Zemin, said China would pursue a mutually beneficial strategy of opening up. 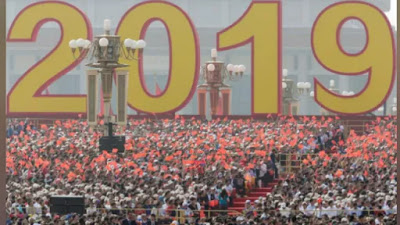 “No force can ever shake the status of China, or stop the Chinese people and nation from marching forward,” Xi said from the Gate of Heavenly Peace, where Mao Zedong proclaimed the founding of the People’s Republic of China on this day in 1949.

China must maintain lasting prosperity and stability in Hong Kong and Macao, promote the peaceful development of relations with self-ruled Taiwan and “continue to strive for the motherland’s complete reunification,” he added.

Xi, whose military modernisation program has rattled nerves around the region, then inspected row upon row of military hardware and immaculately presented troops.

At one stage, Xi, riding past troops in a black, open-roofed limousine, shouted: “Hello comrades, hard-working comrades!” The massed ranks bellowed back: “Follow the Party! Fight to win! Forge exemplary conduct!” Returning to the stage, Xi watched as lines of tanks, drones and missiles filed past, as reported by Reuters.