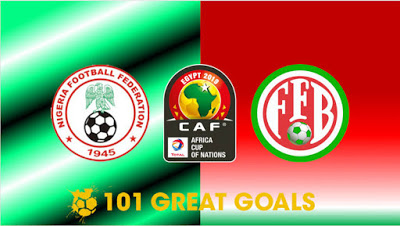 Kindly reload this page after every 4mins…

3’ — Iwobi wins first free kick
Alex Iwobi wins free kick for Nigeria in Burundi’s half after the Arsenal attacker was brought down in the middle of the pitch.

7’ — Chukwueze’s shot Villarreal attacker Samuel Chukwueze launched a close range shot after connecting with Shehu Abdullahi’s pass from the right flank but his shot was deflected by the opponents. Chukwueze tried dribbling his way into Burundi’s defence line before firing the shot which was blocked by the defenders

11’ — Burundi’s chance The Swallows are trying to make something happen in the Nigerian back line but Kenneth Omeruo was in line to clear the danger off the Super Eagles box.

14’ — Superb save from Nahimana Burundi goalkeeper Nahimana saved Paul Onuachu’s header from making into the net and the Swallows immediately launched a counter attacking move on the Super Eagles, but Daniel Akpeyi was also on ground to stop Berahino from powering his side ahead Berahino’s volley was goal-bound but the South African based goalkeeper was in the right place to keep the ball from going through

Kindly reload this page after every 4mins…

45’ — Mikel’s waste Captain Mikel Obi had a chance to set Paul Onuachu up but the attacker fell even before he was able to pass the ball to the striker but the Swallows took advantage as they launched a quick counter attack but they were also unable to finish up. And the Seychelles referee signaled the end of the first half as both teams remain goalless in the match

91’ — Musa’s cross Super Eagles launched a quick counter attacking move through Ahmed Musa on the left flank, but his effort failed to find his teammate after hastily crossing the ball into the opponent’s danger zone

Nigeria takes all three points after the first match of the competition.