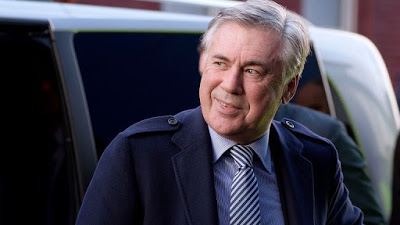 The former Bayern Munich and Chelsea Manager, Carlo Ancelotti has been appointed Everton manager on a four-and-a-half-year deal.

Ancelotti will attend Saturday’s Premier League clash with Arsenal, but will not take charge until the Boxing Day visit of Burnley.

In the course of his managerial career, Ancelotti in England between 2009 until 2011 with Chelsea, he won the Premier League, the FA Cup and the Community Shield. He has also lifted three Champions League trophies.

Ancelotti will meet his new players and start his new role from Sunday, with his first game in charge against Burnley on Boxing Day.

Ferguson and Ancelotti’s son Davide will work as assistants to the 60-year-old.

In an interview, Ancelotti said;

This is a great club with a rich history and a very passionate fan base. There is a clear vision from the owner and the board to deliver success and trophies.

That is something that appeals to me as a manager and I am thrilled at the prospect of being able to work with everybody at the club to help make that vision a reality.

I have seen from the performances in the last two weeks that the players are capable of so much. The work Duncan has done is a great credit to him.

Strong organisation, strong discipline and the right motivation are some of the key ingredients in football and I’m pleased that he will be part of my backroom team moving forward.

Taking to his twitter handle, the excited new manager wrote;

Excited to share the news that I am joining Everton FC. I am delighted to be back in the Premier League and to be part of this historic club. Thank you for your trust in me. #WelcomeMrAncelotti #EFC #COYB 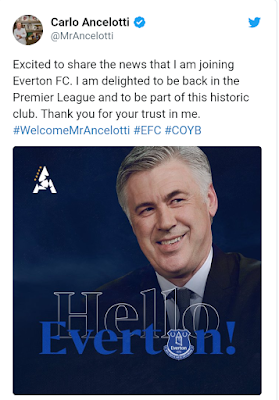