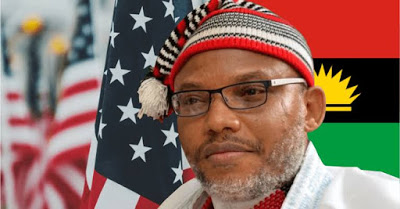 Nnamdi Kanu has accused the British government and some of its nationals of being Nigeria’s greatest enemy.

The leader of the indigenous people of Biafra, IPOD, accused those who are asking the group to go through “appropriate channel” to secure Biafra of being hypocrites.

While Speaking in the last edition of the 2019 radio Biafra broadcast and new year message, Kanu said,

When the Jihadist in Abuja wanted Sharia law they did not go to the National Assembly or call for referendum to bote to get it, rather the twelve Sharia States went outside the Constitution of Nigeria and agreed and introduced Sharia Law, but today they are asking us why we are agitating for Biafra and telling us to go through the appropriate channel when they did not go through appropriate channel to get Sharia they are practicing today.

Who in Nigeria today voted for Sharia Law to be practiced in Nigerian Northern states today, is Sharia in Nigerian Constitution, they willingly subverted the Constitution of Nigeria and imposed Sharia on the Northern Nigerians.

If they believe in the Constitution of Nigeria, they would not have introduced Sharia Law within Nigeria where the Constitution exist, so when they tell us not to agitate for Biafra, what is their moral right and justification for telling us that, Biafrans should ask them how they got Sharia being practised in Nigeria Northern States anytime they kick against Biafra agitation.

We should ask them which channel did they use to introduce and get Sharia Law being practised in the twelve Northern States. You cannot tell us that one law operates for people in the North while another operate for the people in the South under one country that you said operate a Constitution.

The greatest enemy of Nigeria is British government and some of its nationals, they are the ones perpetrating, support and financing terrorism with the people occupying Aso Rock and deceiving Nigerians that they mean well for them

The mistake the Southern Kaduna are making is that they think Biafrans hate them, but only Biafrans can save them,.no amount of peaceful resolution of intervention can save them because their Governor hates them and has confirmed that the state is divided between Muslims and Christian.