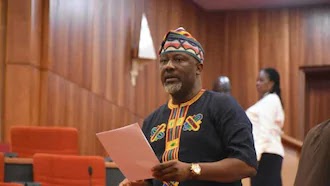 The senator representing Kogi West senatorial district at the Senate, Dino Melaye, has been sacked by the National Assembly election petition tribunal.

Sen. Melaye, who was a candidate of the Peoples Democratic Party (PDP), was declared winner of the February 23 election by the Independent National Electoral Commission (INEC) – Vanguard reports.

Dissatisfied by the declaration, Senator Smart Adeyemi, who was the candidate of All Progressives Congress (APC), approached the tribunal to challenge Melaye’s victory, citing, irregularities, over-voting and non compliance with the electoral acts.

The three man panel led by Justice A. O. Chijioke in a unanimous judgment on Friday, August 23, accepted Adeyemi’s ground and ordered for reelection into the senatorial axis.

Reacting to the tribunal’s judgement, Melaye who is contesting in the upcoming governorship election in Kogi state said there was no cause for alarm over his sack, adding that his mandate would not be taken from him.

It was reported that the embattled senator said that even if the ruling was in his favour, it would have been appealed.

He insisted that there would be fresh senatorial election in the district and that he would be Kogi’s next governor. According to him, he who laughs last laughs long.

Facebook
Twitter
Pinterest
WhatsApp
Previous articleOn My Journey, I Fell Down A Couple Times But I Never Fell Off’ – Anthony Joshua Says As He Shows His Physique
Next articleNigerians Drags It With EFCC After The Agency Dropped A ‘rap’ Punchline On Social Media