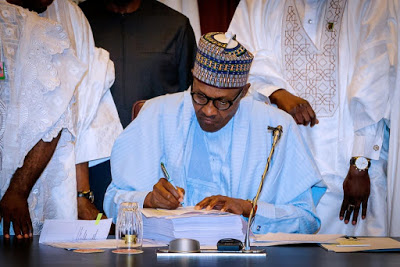 However the budget was adjusted after submission to the National Assembly which the house increased it from the initial N10.33 trillion to N10.594billion.

N560.47 billion of the total budget is for statutory transfers while N2.7 trillion is for debt service.

The budget maintained Nigeria’s daily oil production rate at 2.18 million per barrel, but increased the Oil Benchmark Price to 57 dollars per barrel against the 55 dollars proposed by the Executive.

The inflation rate seems to be static at 10.81 per cent and the exchange rate at N305 to a dollars as proposed by the executive.

The signing of the budget into law at the President’s mini-conference hall was witnessed by the Vice-President Yemi Osinbajo; Senate President Ahmad Lawan; the Speaker, House of Representatives, Femi Gbajabiamila; Secretary to the Government of the Federation, Mr Boss Mustapha as well as presidential aides.