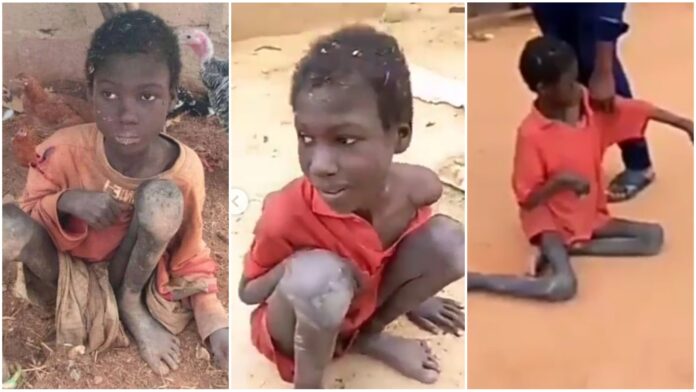 According to a viral video making the rounds, a boy identified as Jibril was chained with animals for 2 years by his stepmother.

His mother died 2 years ago. He was denied shelter, clothing, food, not to talk of health care.

He was maltreated by these same people like an animal to the extent that he was feeding on the remnant food until he was rescued by some Human Rights Activist.

As a result of monstrous and nefarious treatment, he was subjected to, he entirely lost his senses and behaves exactly like an animal.

What is most surprising is the fact that his father was living in the same house with them while he undergoes the inhumane and savagely cruel treatment.

His 2 stepmothers, together with his father are currently in police custody. While the 10-year-old Jibril is undergoing treatment and rehabilitation at the Federal Medical Center Birnin Kebbi.

Manir Jega who shared videos of the boy’s rescue said.

The epileptic boy was reportedly chained with animals and had to survive by eating remnants of the animals’ food.

He also sometimes ate his own faeces

As a result of monstrous and nefarious treatment he was subjected to, he entirely lost his senses and behaves exactly like an animal.

The State police Public Relations Officer, DSP Nafi’u Abubakar, confirmed the arrest of the boy’s father and stepmothers in Birnin Kebbi on Monday.

Yes our men have arrested a father to an 11-year-old, Jibrin Aliyu, and three wives for allegedly chaining the boy for over two years.

Our men arrested the suspects on Sunday in Badariya area of Birnin Kebbi Local Government, and the boy is at Sir Yahaya Memorial Hospital as the investigation is still ongoing to unravel the circumstances behind chaining the boy in animal stall for that period.