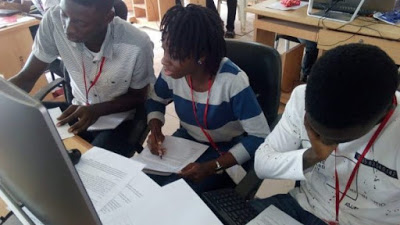 A group of three students from the Osun State based private institution, Bowen University, on Friday emerged the overall winner of the 2019 Nigeria Universities Programming Contest (NUCPC), after slugging it out with 15 other teams.

Bowen University is a private institution owned by the Baptist Church and run by the Nigerian Baptist Convention.

FreshReporters News understood that the winning team will at the next level of the contest represent Nigeria with three others that came second, third and fourth in the upcomming Africa and Arab Collegiate Programming Championship (ACPC).

Earlier, Prof. Stephen Onah, the Director/Chief Executive of the National Mathematical Centre (NMC), in a speech at the closing ceremony in Sheda, Kwali Area Council, congratulated all the participants, saying that everyone was a winner.

“For many reasons, this contest in itself is not an all comers contest. Its goal was to select the best from different universities. Before you came, you were among the top persons within your departments.


“You have been ranked as the best three in each of the levels, so no one is the least intelligent among you.”

Onah also said that in order to sustain and encourage the learning of computer programming, the Centre had collaborated with other relevant stakeholders to create clubs in the schools.
According to him, this will help the Centre to “catch them young” through different intellectual activities like debates and competitions, among others.

“This annual Nigeria Universities Programming Contest (NUCPC) for the 16 teams from Nigerian universities is in fulfillment of the mandate of NMC,” he added.

Similarly, Mrs. Oluchi Bamidele, the Coordinator, Computer Science Programme of NMC, said that the aim of the contest was to discover young talents in Computer Science/IT in the universities across the country.

“The contest also seeks to foster creativity, teamwork and innovation in building new software programmes and enable students to test their abilities to perform under pressure,’’ he said.

According to her, each university presented a minimum of one team and a maximum of three teams with each team comprising three members.

Also speaking, Mr Mohamed Fouad, the Executive Director, ACPC, expressed satisfaction at the conduct of the participants and encouraged them to study harder so as to compete favourably globally.

Fouad said that the NUCPC was the most prestigious national programming contest.


“I’m very happy to see these bright students participating in the competition. This is the first time we are conducting this competition internationally.


“The conduct here is better than many other countries we have visited, considering the fact that this is the first time the country is hosting it.

“This is their first experience in this type of competition, so they need to try harder to reach the international level,” he reiterated.

He also said that the team from the Africa and Arab Collegiate Programming Championship had concluded plans to conduct free online training for the teams that qualified for the next level.