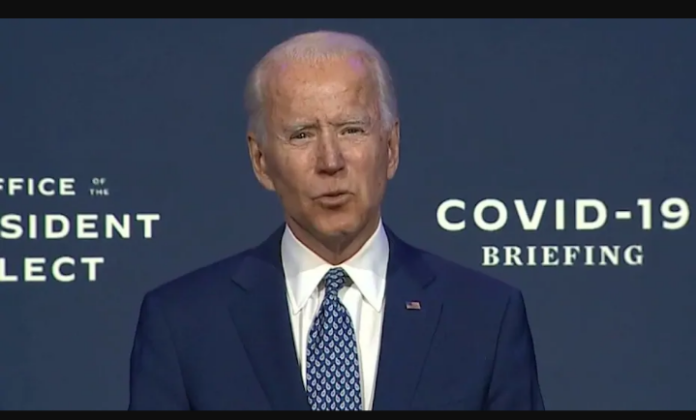 Biden plans to rejoin Paris Agreement and WHO, undo other Trump decisions on Day 1

The President-elect of the United States of America, Joe Biden has planned to carry out on his first day in the White House, four executive orders rolling back President Trump‘s efforts on a number of issues, Fox News reports.

It would be recalled that a lot of the U.S’ based media channels announced Biden as the winner of the just concluded U.S election hence, Biden projects his plans.

Up till Monday, the Trump team vowed to continue challenging the results, citing issues with ballots and the counting process.

Monday’s news signaled the beginning of a longer effort to undo a variety of policies pursued by Trump. Biden has vowed to repeal Trump’s tax cuts, for example, and said that he would reverse the Mexico City Policy, which Trump reinstated shortly after taking office in 2017.

Biden Launches Transition Website As He Prepares For Presidency

Biden Won The Election But It Was Rigged – Trump Concedes Defeat

The Election Is Far From Over – Donald Trump Reminds Biden

That policy restricts international funding for organizations that promote abortion. Other abortion-related policies and those weakening the Affordable Care Act, will likely be on the chopping block in a Biden-Harris administration as well.

The White House did not immediately respond to Fox News’ request for comment.

Biden’s decision to re-enter the WHO reflected a broader effort to combat the coronavirus upon taking office. Democrats have decried Trump’s decision to exit the transnational organization in the middle of a pandemic. Trump has defended the move as a way to hold the organization accountable for alleged missteps during the pandemic.

The president-elect has setup a coronavirus advisory board which is reportedly dominated by scientists and doctors.

“The challenge before us right now is still immense and growing, and so is the need for bold action to fight this pandemic,”

Biden after being briefed on the virus added that “We are still facing a dark winter.”

US House Of Reps Ends Federal Prohibition On Marijuana

Marijuana have been removed from the list of federal controlled substances in the United States of America. The landmark bill was passed by the US...
Read more
Crimes

Three Nigerians were arrested in India by the Mumbai Police Special Squad for been in possession of illegal drugs. About 220 grams of cocaine worth...
Read more
Politics

President Muhammadu Buhari is set to honour the invitation issued to him by the House of Representatives over recent security challenges facing the country. This...
Read more
Foreign News

Canadian–American professional wrestler, Pat Patterson who created the "Royal Rumble" has died aged 79. The death of the legend was revealed in a statement on...
Read more

The director-general of Nigeria Centre for Disease Control, NCDC, Dr Chikwe Ihekweazu, says there are possibilities that coronavirus (COVID-19) can be transmitted through the...
Read more
Load more