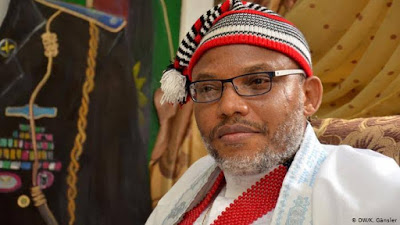 Nnamdi Kanu, the British-Biafran political activist and the leader of the Indigenous People of Biafra (IPOB), who was arrested on treason charges in Lagos, Nigeria on 14 October 2015 and was detained for more than a year and was released on bail from prison On 28 April 2017.

However, Kanu disappeared from public view after his home was raided by the Nigerian military in September 2017. There had been speculations regarding his whereabouts for over a year with members of his IPOB accusing the Buhari government of masterminding his abduction.

Kanu later reappear in October 2018 after photographs and videos of him in Israel were widely circulated on social media.

Since then, though his whereabout is not certain but have been speaking through his channels, Radio Biafra and social media.

In his latest revelation, Kanu have reveal that, the push of agitation has received a revelation by the top countries and the declaration will shake the whole world after the announcement will be made by the UN, US, and EU body in 2020.

According to Kanu, he has gladly received the news and urges all his member to keep the celebration mood high without violence.

Nnamdi Kanu has assured all IPOB members that Biafra freedom will be announce in 2020 and the joy, jubilation and celebration of Biafrans will shake the whole world.

IPOB has reacted to the news that the only joy is to achieved Biafra freedom in 2020 and all the Biafrans across the world has joined hand in hand to the push of Biafra referendum.