Benue Most Wanted Terrorist Killed After Surrendering To Amnesty 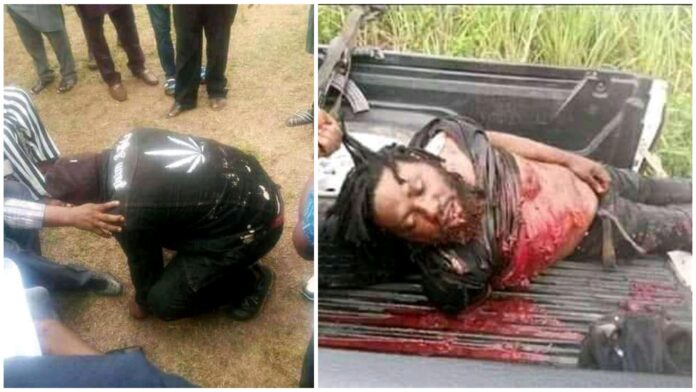 Benue Most Wanted Terrorist Killed After Surrendering To Amnesty

Benue most wanted militia kingpin, Terwase Akwasa, popularly known as Gana was killed near Yandev roundabout in Gboko Local Government Area of the state, after surrendering to amnesty.

Freshreporters reported that Gana surrendered for the amnesty programme in Katsina Ala township stadium in Katsina Ala local government area of Benue north senatorial zone on Tuesday.

Gana, alongside some of his gang members were intercepted while being conveyed by the council of Sankera traditional rulers from Katsina-Ala town to Makurdi to be granted amnesty.

Governor Samuel Ortom said at a press conference about 8:30 pm that over 172 of the outlaws embraced the amnesty and were being brought for formal presentation to the state security council before the soldiers took away Gana and many others.

We heard that some soldiers intercepted them after they took off from Katsina-Ala, at a roadblock near Yandev roundabout.

Gana, who was among them was apprehended alongside several others and taken away in their vehicle.

We tried to reach out to General Yekini who confirmed to me that they (Army) were responsible and will bring him later.

Ortom further disclosed that in the aftermath of the arrest, some of the boys returned to Katsina-Ala, while only 42 reached their destination in Government House, Makurdi.

But in a twist, the commander of the 4 Special Forces Command in Nasarawa State, Brig-General Maude Gadzama announced Tuesday that Terwase Akwasa “Gana” was killed in a fire fight with the military.